Film Connection student Steven Deleonardis is traveling, working camera and getting paid for it! 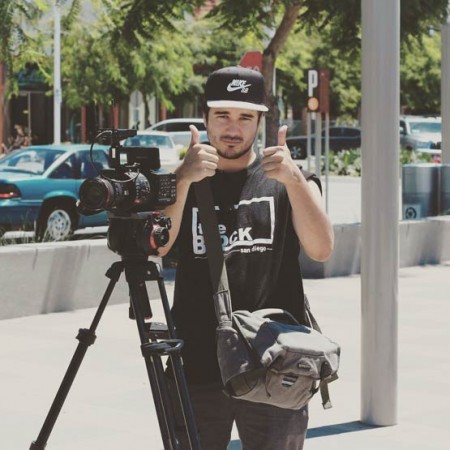 You never know where you’re going to find Film Connection student Steven Deleonardis these days. Since starting as an apprentice with Film Connection mentor Hector Ramos at EQ Studios in San Diego, California, Steven has been working on paid assignments through the company, including some that have taken him to lots of interesting places.

“I’ve gone to Hawaii, I’ve gone to Miami, Oregon, and a couple other places,” he says. “It’s been great. I get to travel to different parts of the United States. And it’s interesting—it’s like personal development. That’s stuff I’m interested in, so it’s a win-win. I get to work with cameras and get paid for it.”

Steven’s interest in film was piqued early on. “I had a bunch of kids my age in the neighborhood I moved into, and we just all loved making movies,” says Steven. “We liked Star Wars a lot, so we remade a lot of Star Wars scenes…We just shot with my parents’ camcorder. Then we just had this older kid in the neighborhood that knew how to edit, and then he did it for us…That’s where it all started.”

Steven stopped working on films for a while to focus on sports in high school, but eventually his interest was revived, and he started scoping out film schools. “I found Film Connection online,” he says. “It really made a lot of sense to me, and it sparked that again for me that I could see that I could actually work at a production studio, and do something I really didn’t know how I would get into in the first place.”

As Steven started his apprenticeship at EQ Studios, he says his mentors really helped him understand both the business and technical sides of production. “[Hector has] taught me a lot about…he’s more the business aspect,” he says. “We work together on a lot of stuff. We talk about a lot of business things. So he’s helped me a lot in that, just to deal with clients and all that. And then the main guy, Andrew, is one of my other mentors there. He’s taught me a lot, everything, from shooting and editing. So he’s been a big help there, too.”

Steven also loves the fact that the studio has given him room to grow. “It’s really laid back, everyone there,” he says. “All the guys there are really helpful. They know a lot about lighting, and sound, and all that stuff, so I get a lot of knowledge from them…I can be really creative in that space, which is really nice.”

As Steven went through the various aspects of the program, it also helped refine for him what roles he really enjoys in the film business. “Coming into it, I wasn’t really sure,” he says. “I was maybe like, ‘A director?’ But everyone wants to do that. I wanted to figure out what that really meant, and what I found is that I enjoy cinematography the most. I’m really into the technical aspects of camera and lighting. It really interests me.”

As it turned out, learning on the job quickly turned into paid work through the studio as Steven excelled and made himself available—including the travel opportunities mentioned earlier. “Just always being open to taking opportunities, taking everything I could get, it led to that,” he says. “I met the right people that were able to allow me to do that.”

Meanwhile, Steven has been working on his on projects on the side with one of his old film buddies from childhood, making several short films, including one called Hypochondriac that landed a cash prize of $1000 at a student festival. Steven says they have plans to turn their collaboration into a production company with an eye toward the future. “I’m really interested in the future of filming and where it’s going, how it’s going to progress,” he says. “And I see myself working on traditional films with my own production company, and getting into virtual reality films as well, really just in that technology. I’m really passionate about where virtual reality is going.”

In the meantime, Steven is happy to be getting paid for doing what he loves, and even getting to see some new places along the way. “It’s been awesome,” he says. “I’ve done so many cool things in the studio I’ve been working with. I’ve had a great experience with Film Connection, opportunities it gave me.”