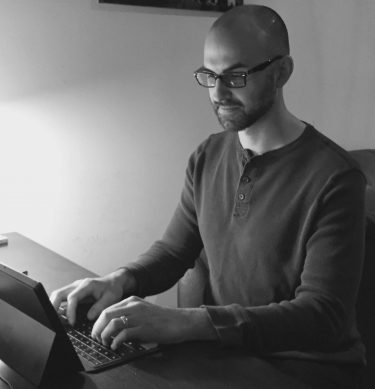 For Film Connection grad Geoffrey D. Calhoun, the realization that he wanted to pursue screenwriting as a full time career came to him suddenly while working as an MRI technologist.

“I actually started screenwriting as a bet,” he explains. “I was at work, and a guy was an editor in film, and it was his side job. And he bet that he could write a better story than I could. And I’m a bit competitive, so I went home that night and started researching how to learn screenplay. I wrote a treatment that night and came back to work, and we compared stories and I won. And my wife read it and she goes, ‘Wow, there’s really something here. You might want to consider just writing the whole screenplay.’ So…I started writing just really as a hobby.”

During those “hobby” years, Geoffrey wrote a script called Pink Bunny, which he now describes as his “calling card.” “This is one that I wrote to really push myself as a writer,” he says. “It’s done in a Rashomon style, but it’s actually done in a style that really nobody has done it before…I’ve won a lot of awards for that one.”

Then came the epiphany.

“I was at work,” he says, “and one of my patients said to me …‘Do you love what you do?’ And it just hit me like, I just realized I didn’t…And there was this big moment where I realized I need to pursue my passion. I hadn’t even realized that I could make screenwriting an option.”

Having already done the college route before entering the healthcare profession, Geoffrey wasn’t big on the idea of going back there to study screenwriting. “I’m not really a college guy,” he admits. “I wanted to find a program that I could really have a mentor…and really learn from a person and not become lost in a crowd…And then I found The Film Connection, and it was perfect. It really felt like it was tailored to my learning style.”

Geoffrey was paired with Los Angeles-based writer/director Richard Brandes, and the two hit it off quite well from the initial conversation. “He said, ‘Oh, it’s just going to be a quick 20-minute interview.’ I think we were on the phone for about an hour,” says Geoffrey. “He was just so great to talk to, and I was picking his brain. I told him about Pink Bunny, and I told him how people either hate it or they like it. It either wins awards or people just slam it as they don’t get it. Then he said, “It’s probably really good.” So he asked me to send it to him, and he read it…He liked it. And I thought, ‘I really need to learn from this guy’…And so he took me on as his extern.”

Since the screenwriting program of the Film Connection can be done via Skype, Geoffrey was able to do his extership from his home in the Detroit area without having to move to L.A. He says Richard was very specific in helping him to up his game. “He really taught me how to descriptively make a scene more appealing to read,” he says. “And that really is the difference between a good screenwriter and a great screenwriter.”

Now graduated from the program, Geoffrey is continuing to write screenplays and hone his craft. His recent script, a zombie comedy he co-wrote called Hipster Z, won First Place at the International Horror Film Festival and is getting some interest from several producers. Perhaps even more significantly, his former mentor is continuing to work with him to knock on doors in Hollywood.

“I have developed a few projects with Richard,” says Geoffrey. “He is giving them some exposure to some of the contacts he has specifically at a few network channels, which is pretty exciting. And there’s a lot of potential there for some development deals.”

He admits it’s a waiting game but it’s obvious Geoffrey is in it for the long haul. “These things take a long time,” he says, “but for me, it’s super exciting. I’m happy to wait, even if there’s a sliver of chance of getting a deal made. [Richard] believes in my writing. For me, as an emerging screenwriter, I feel it’s a when and not an if, and that’s a really great place to be.”

Geoffrey gives the Film Connection a lot of credit for where he is today. “You can call it fate, or just the people I had interviewed with really had a good take on my personality and just matched me up with the right mentor,” he says. “I was worried I would get a mentor that wouldn’t understand me, or I wouldn’t be able to click with. But I mean, Richard Brandes and I, it’s just such a nurturing relationship. He’s taken my screenwriting to a whole different level.”

He also says the Film Connection helped him with his branding as a screenwriter. “They really stressed having an online presence,” he says, “and so I put a lot of work into that. And now if you Google my name, Geoffrey D. Calhoun, that’s my brand per se, I’m the whole first page, which is super cool. I know my kid gets a kick out of it because he Googles me at school and shows his friends.”

At the same time, Geoffrey stresses that you get out of the program what you put into it. His advice to other students? “In order to be successful you need to stay humble and you need to stay a student,” he says. “So, even after you graduate, you should still be a student. You shouldn’t go into it expecting The Film Connection to do the work for you…The Film Connection has set up a nice program that gives you 200 hours of screenwriting time to provide you an opportunity for you to prove yourself. And then they give you a mentor to guide you through the process, but you are doing the work, and you have to be able to do it. If you’re not self-motivated, if you’re not hungry, then you’re not going to succeed.”