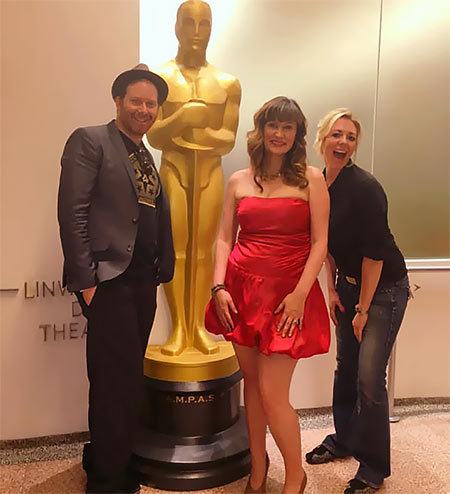 Film Connection mentor Bayou Bennett, who forms one-half of the award-winning Dream Team Directors with husband Daniel Lir, is not only a top-notch director, but a true mentor who is passionate about seeing her students succeed. Case in point: when we caught up with her recently, she couldn’t help but start the conversation off by bragging on one of her star student externs, Kim Ferrari.

“As we were developing her as an artist, she realized that she wanted to do documentary filmmaking,” says Bayou. “And that’s perfect, because part of what our production company does are documentaries. We put her on the camera, gave her some tips, and we noticed her natural ability as cinematographer. For one of her projects with us, we had her interview me on camera. As we were working with her, she was interviewing me about one of our how to videos, “How to go Viral,” I recognized she was particularly talented in drawing out the information she wanted to get. That’s one of the most important skills of being a good documentary filmmaker, as well as making the interviewees feel comfortable in front the camera when answering questions. Kim was a natural.”

Under their Hollywood-based production company banner, Dream Team Directors, Bennett and Lir have established themselves as a powerhouse husband and wife writer/director team. They are currently partnering with E.J. Johnson, the Executive Producer of NBC’s “Fashion Star” on a new project called “The Baron Of Beverly Hills” about the the life and times of one-of-a-kind Beverly Hills concierge to the elite. Kim has been a regular with Bayou and Daniel on numerous film shoots, including the TV pilot, filming a certain artist at the legendary EastWest Studios, and doing documentary work for Write Girl, an organization that empowers young female writers.

“Write Girl—is an organization dedicated to helping young women to create their own voice in writing,” Bayou explains. “We do most of their videos…They had TV stars come and perform with the young girls who were writing on stage, in front of a huge crowd. Daniel trusted her so much that he put her on one camera, and then he was on the other camera. So that night, she filmed the actual theater events, and also the red carpet interviews, and kind of got a sense for on-the-fly documentary filmmaking.”

Kim isn’t the only Film Connection student making progress under Bayou and Daniel’s mentoring. Along with making a positive mention of several other students, Bayou made a point of highlighting Charles Dauwalter’s talents as an up-and-coming film editor.

“Charles represents the youngest generation who’s breaking into the creative work force,” she says, “He edits with a fresh perspective. Sometimes I end up telling him, ‘I would have never have thought to do it like that, but it really works.’ It speaks to his generation. With all the different types of editing jobs you can get in this industry: feature films, commercials, music videos, and now, editing specifically for one minute Instagram videos which are videos we also do for our brands, there are a lot of different kinds of projects you can find editing work for. Finding out what areas you want to focus on and developing your style knowing who your audience will be can help you get the kind of work you’re after.”

Bayou’s passion for mentoring new filmmakers comes in part from her experience as a film teacher.

“I was a professor of filmmaking for a total of six years at top schools like Parsons New School in New York, New York Institute of Technology, and the San Francisco Academy of Art,” she says. “I loved teaching there. But one of the best things about the Film Connection is the 1 to 1 ratio, student to teacher. We also interview and hand pick our students with the Film Connection staff to make sure they are a perfect fit. Every student that has come to us has advanced their career. We really take the time to help and guide them to reach their ultimate goals. I also love bringing them on our film sets and enabling them to experience hands-on learning from within an actual working production environment.”

To that end, Bayou has some key advice for students coming into the Film Connection program:

“Don’t just go and learn from the book, that type of thing,” she says. “Make yourself available, and be willing to do anything…Take advantage of the fact that you are learning from professionals and just always have your ears open. Because I know Daniel and I will be in the office and our students will be editing, and I hope that they’ll take off their headphones sometimes and just listen to how we sell ourselves, how we get the job, and things like that…We’re artists, obviously, writers, directors, producers. But there’s another side, which a lot of schools don’t teach, which is the business side. You have to know how to sell yourself. You have to know how to close the job, how to get the job. So…if they’re in the office with their mentor, listen, watch what they do, watch how they dress, watch how they act, and see how they sell themselves.”