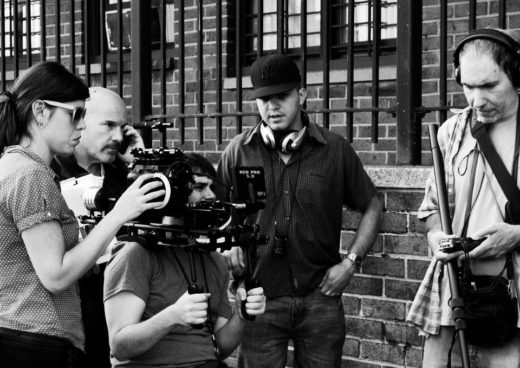 As a filmmaker, Film Connection mentor Zef Cota has learned to keep plenty of irons in the fire. In addition to heading up his own narrative film production company, Alphabet City Films, he regularly does film work for IBM, as well as shooting commercial projects and music videos under his commercial company, Filmtek.

In addition to all this, Zef is passionate about helping his students succeed. He’s known for tailoring the curriculum to each of his students’ needs, and going the extra mile to help them achieve their goals—as he recently did for Film student Dylan Rothbein, who was featured in last week’s newsletter.

RRFC newsletter writer Jeff McQ recently had the chance to talk with Zef in person at his studio in The Bronx, New York, where Zef talked about the power of gaining real-world experience and how he tries to adapt to the needs of each of his externs. Enjoy!

RRFC: So let’s start with your own backstory. How did you get interested in film, and how did this become a career for you?

Zef Cota: Well, it’s a story of an interesting trajectory because it’s very unusual. I’ve always had a very deep interest in cinema, but I came from this sort of Albanian immigrant, working class-minded family and it seemed like filmmaking and cinema was a pipe dream. They never said, “That’s not for us,” but it just kind of seemed like I’m not going to go to film school because it didn’t seem like the appropriate path. I didn’t have any Hollywood connections, wasn’t born with a silver spoon, that sort of thing. So I went to school for business. I started a welding iron work business when I was 22 years old…I started making money, started doing really well with it, but I realized that this thing that I thought I was chasing, which is financial success and material success or whatever, that wasn’t the thing that was fulfilling me. Then, I had this epiphany where I put the brakes on my life and said, “If I could do anything that I would want to do for the rest of my life, what would it be?” Then my answer was definitely to become a filmmaker. So I gravitated toward that direction.

RRFC: What kind of training did you have?
Zef: I was self-taught…Actually, at the time I wished that something like Film Connection existed because I was really weighing out the options of whether, should I go to film school…I decided to take my money and just self-produce all my first short films. I sold my welding iron work business, sold all the equipment. I turned my welding shop into a film studio…I guess other people saw it coming before I did, but I do wish such a program existed because I would have loved somebody to help me kind of expedite some of the knowledge that I had to learn through trial and error…I had to really struggle with learning the nuts and bolts of a lot of these things on my own.

RRFC: So without formal education, you basically learned through real-world experience?
Zef: Absolutely, real-world experience. I should add though, even though I didn’t go to a traditional film school, I still immersed myself into film theory, and I had a voracious appetite for books about filmmaking and watching DVD’s with the audio commentary. So I still did take my self-education part of the process extremely seriously and am still pretty rigorous about always learning, because I think cinema is a lifelong learning thing. I think the moment you think you have it all figured out, it’s kind of the wrong approach…there’s always room to grow and improve and evolve.

RRFC: So what do you look for in an extern? What qualities prompt you to devote time and energy to training that person?
Zef: I look for somebody that takes it seriously, somebody that is in it for the right reasons…I think if somebody has a deep and meaningful connection to cinema, it doesn’t matter their skill level. If some people are more advanced, some people are totally new, that part is way less important to me because I’ll tailor the curriculum based off the individual student. That’s what’s amazing about Film Connection, is they give you the freedom to do that.

RRFC: How did you find us? How long have you been a Film Connection mentor, and what made you decide to become one?
Zef: I’ve been a mentor for over a year and a half…A friend of mine is a mentor out in L.A. His name is Daniel Lir. He first told me about the program…Daniel’s a really close friend of mine—[and ]Bayou, they’re really great friends of mine. So Daniel first told me about the program…I just thought it sounded amazing. I’ve known Daniel for years. So that’s how I first got introduced, and I’m so glad that I did because it’s such a rewarding experience.

RRFC: How do you integrate the Film Connection curriculum with the hands-on experience?
Zef: I like for them to list their goals—what are their goals for the next six weeks, for the next six months, for the next year. And then I use that as a benchmark to tailor their hands-on curriculum where it’s very individualized to the student. For instance, Dylan [Rothbein] had very specific goals, and some of those goals we crafted together, but he had a very good idea of, “Here’s what I want to accomplish. I want to do a short film, I want to write my feature length film, I want to get that into development,” and he’s reached all those things. Our hands-on experience has been based off that customized curriculum that we set, based off his actual goals.

And if somebody doesn’t have those things, I’ll help them too. I will help them kind of figure out where they should be…I see my role as helping facilitate that, helping them get to that point. But that also is on them, too, how driven they are. The more driven they are, the more I can help them.

RRFC: If I came to you and said, “Zef, I want to be a filmmaker,”—give me the Cliff Notes. What are the most important things an aspiring filmmaker should focus on in this day in age? How should I prepare?
Zef: Perhaps because of my background doing welding and ironwork I have a very pragmatic approach. What I would say to a young filmmaker is, “Before you consider yourself an artist, you have to treat the craft very seriously.” It’s like if you were a welder, before you build this amazing piece of wrought ironwork, you have to build a railing that’s not going to break when you put your hands on it. So I think the same thing is true with the craft of storytelling. You have to learn the craft of telling a story before you actually could consider yourself an artist…I think young filmmakers should really and truly focus on the craft of cinema and respect the cinema that came before them and the evolution of the whole medium.