When Gabe Gottstein decided to deep dive into the world of making films, he’d already had a slew of experience working and excelling in nearly every job he had. From working as a chef in five star restaurants, to leading a construction crew, to working in corporate America, Gabe is all about bringing his A game and moving up the ranks quickly. 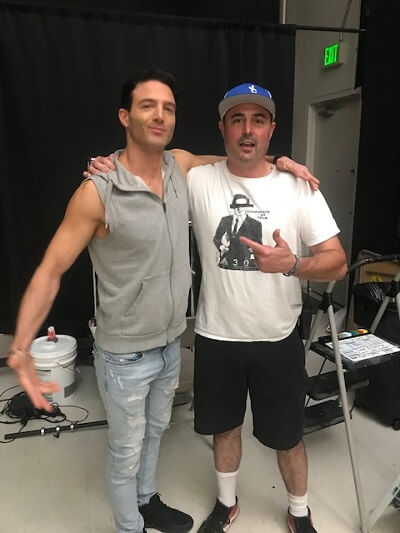 Now, he’s focusing his tremendous work ethic and drive on building a career in film in-tandem with holding down a management job and supporting his family. It’s definitely a challenge but it’s one that’s paying off fast as Gabe nabs grip and AD credits on a number of professional shoots and learns the ins-and-outs of filmmaking during his externship with award-winning Film Connection mentor writer/director/producer Sean McCarthy of Guerilla Wanderers (Bay Area, CA).

What led you to Film Connection in the first place?
“I picked up a screenplay I had been writing for like 17 years, just messing around with it, and realized that I needed to tell the story. It’s been 17 years in the making…I just needed to figure out how to put that on screen. So I needed to go to film school.”

Dropping everything so you could go to film school was not an option for you.
“Nope. I can’t just quit my job and walk away from my responsibilities. Film Connection, when I found it, really and truly was exactly what I was looking for, something that could work around my life schedule. And more importantly, it got me a connection and an ‘in’ with a mentorship program where I could learn hands-on.”

Going into Guerilla Wanderers to interview with your mentor Sean McCarthy. What was that like?
“We ended up talking for like four hours. We just completely hit it off…We just clicked. Literally we clicked…I saw this guy as someone who could teach me and had the energy to do it. I can’t explain it in words. It was just meant to be.”

You recently AD’d a difficult outdoor shoot. What can you tell us about that experience?
“It’s a short film trailer for Cinequest Film Festival in San Jose. We literally pitched it on a Monday, were in pre-production the whole week, and we were shooting Saturday morning. It was insane. 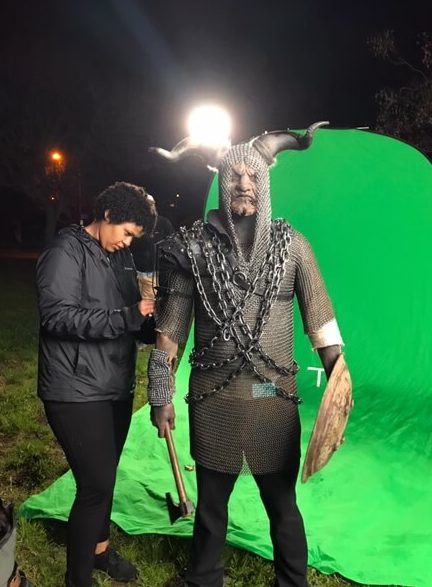 [The shoot] was truly, truly amazing. So I AD’d for four and a half days straight and then had to jump into the costume to get into the ‘demon monster’ part. And that only happened at the very last second…This amazing visual effects artist had me in the chair for two hours, in the dark while I was still radioing the crew, because I was still AD-ing, and she was putting all these prosthetics on me.”

You also worked on a super-secret shoot for a well-known maker of computers, gadgets, and electronic devices.
“Yeah, security was extremely tight… I PA’d my butt off, worked with this awesome Steadicam and cinematographers. We got some amazing stuff. That was a huge shoot, huge commercial shoot.”

You’ve got a list of other commercial projects you’ve worked on during your time in Film Connection.
“We did the San Francisco 49ers, Richard Sherman and a couple other 49ers…I key PA’d it. It was really cool working inside the locker room, meeting all the 49ers, working in a very professional environment. That was cool.

Another commercial shoot and I got to work with another DP and director from Seattle. They offered me a job after the shoot. They were like, ‘Yeah, you can work with us anytime.’ And I swing gripped [for them]. Then there were a couple independent movies that I was on where basically I was key PA, AD, swing grip, you name it. I’m starting to work with these people that have reels and real life experience and have worked on or in films I know, and I’m like, wow, this is so insane…

Then on “Doucheaholics” which is Guerrilla Wanderers’ comedy web series, I AD’d for season 2, episode 1…That was five straight days of me AD-ing and being the production coordinator. One of our key actors went out with a back injury the night before his main shoot…So five days, yeah, we didn’t stop for five days.” 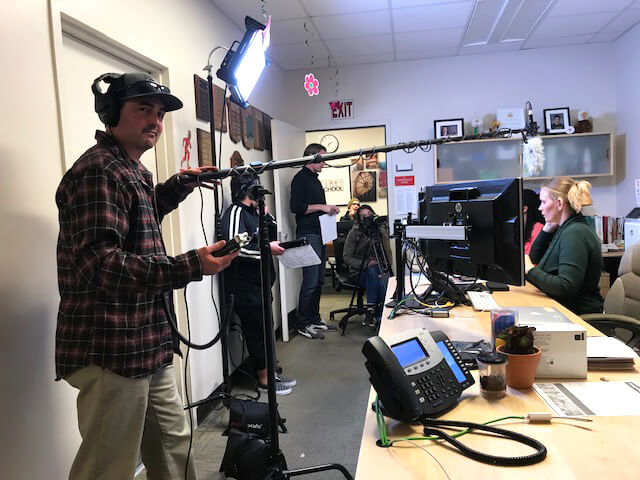 In your time with Guerilla Wanderers you’ve been able to experience both the big studio way to do things and the guerrilla way of doing it.
“The ‘super-secret shoot,’ the 49ers shoot, it was all breaks, lunch, crafty…then you go guerrilla where you have to make it happen. So, that was probably the most fun I’ve ever had on set. And being an AD with someone like Sean and someone like Christopher Soren Kelly and all these professionals that have been doing this for half their lives or more, attempting to keep up and make sure that I’m competent and ahead of the game, communicate with the proper nomenclature, lingo, that I speak the language. I mean, you can sniff out a hack or a fraud in like two seconds. I mean, it’s apparent. It’s transparent.”

What’s your advice for other Film Connection students on how they can make the most of the program?
“My advice is, if you’re not already in Film Connection, sign up and get into Film Connection. But you don’t have to quit your life…Put in the work, read the course material, submit the quizzes, use your own voice, speak like you would speak, write like you would write. You do you, and that will come across. There were so many times that either that day, or the next day, or the weekend after, [I was] putting to use everything I had learned on my online curriculum.

Learn more about Film Connection’s programs and workshops in film.