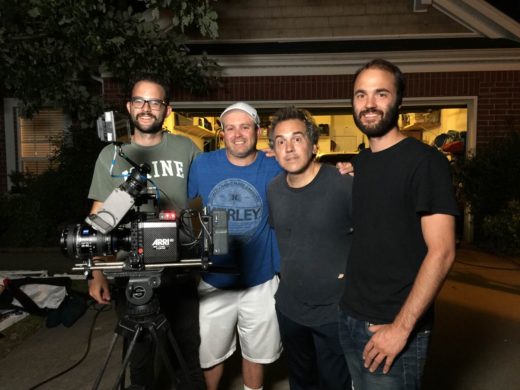 As the owner of Skydive Films in Nashville, Tennessee, Emmy-winning Film Connection mentor Zac Adams is arguably one of the busiest filmmakers outside of the Hollywood scene. When we caught up with him recently, he was putting the finishing touches on his latest full-length documentary Iron Will, a project two and a half years in the making, now set for its world premiere on October 22nd at the Twin Cities Film Festival in Minneapolis.

“It’s a film about veterans battling their PTSD, how to help overcome it,” Zac explains. “Billy Bob Thornton’s the narrator—we finished about two weeks ago with all his narration. And Charlie Daniels is in it, he’s a big supporter of the troops, country music singer. Randy Couture, who starred with Stallone in the ‘Expendables‘ films, he’s a UFC fighting legend, really. He was also a veteran, so he was on camera. Then Big Kenny, from the band Big and Rich, they’re a really big country band. We have got some great people involved.”

One of the reasons Zac is one of our most noted Film Connection mentors is the reputation he has for getting his students integrally involved in his projects. Iron Will was no exception.

“We had several Film Connection students work on it,” he says. “We had Jamie Reed, who graduated and since moved to Los Angeles. Had Corey Pitts, who recently graduated, he’s doing well.  Jamie Reed worked on some of the interviews…Reid Harris worked on them a lot and worked on some of the trailer editing. Corey Pitts worked on it quite a bit and helped with some of the trailer, he helped on set. My brand new guy, Brandon Russell, helped a lot on it…He worked on our reenacting scenes. We put him to work, they’re long days—ten, twelve-hour days. He handled it like a pro.”

Zac’s success in film, as well as the high quality content he produces, is owing in part to his meticulous process, which also helps his students receive well-rounded training while studying with him.

“I’m a big fan of pre-production, planning everything out,” he says. “The reason I am, when I was younger, especially in film school, I didn’t do that. I would make it up on set—‘Shot list! Ah, we don’t need that!’—and then you don’t get the cover that you need, you have to go out and re-shoot. So I’m a big fan of doing everything the right way because then it saves you time and money.”

This attention to detail and excellence is also something Zac tries to impart to his students because he understands firsthand the competitive nature of the business. “You’ve got to give it 150 percent,” he says. “100 percent is not going to cut it. It’s just too competitive. That’s what I try to tell my apprentices, that’s why I make them go above and beyond…Before they graduate, [they] either have to direct a music video, a narrative short film or a short documentary. They have to do that, and that way they have something on the reel…they have contacts, they have a great resume with all these projects that they’ve been working on, but they have something that they’ve done as well.”

It’s no surprise that Zac is in high demand as a Film Connection mentor. So what does he look for in a potential student? What impresses him?

“Say your call time is 7 a.m., you get there at 6:45,” says Zac. “Don’t show up late, always have a good attitude, and work ethic goes so far in this business. I’ve met people that are so super talented, but their attitude sucks, I won’t hire them. I don’t care how great they are. If their attitude’s bad, it brings down the attitude of a lot of other people on set and you can’t have that, especially when you’re working sometimes 12 to 18 hour days on set. You’ve got to be motivated, you’ve got to have high energy, you’ve got to be positive.”

Any other advice for up-and-coming filmmakers?