Every time we talk with Film Connection mentor Christine Chen, she’s got something meaningful to convey to our students. As founder and CEO of Moth to Flame Films in Austin, TX, Christine always has several projects on the burner, and she’s excited and eager to use those projects to help her students gain real-world experience. In the conversation below, Christine shares some thoughts about the film component of this year’s SXSW, talks about current films in production or circulation and the role her students play in the process, and shares some important insights about being business-minded and proactive in the film industry. Enjoy!

RRFC:  So how was SXSW this year? 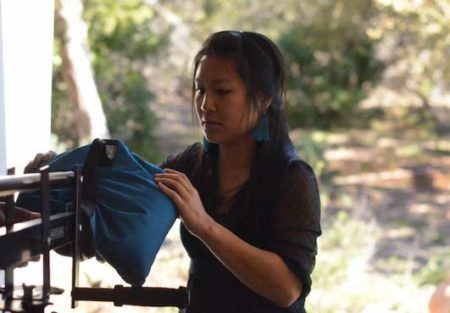 Christine Chen: This year was pretty good…I was in a lot of distribution panels this year, trying to figure out distribution for features and stuff. I saw some great films. Two of them were Atomic Blonde, which I really enjoyed a lot, directed by the guy who directed John Wick, starring Charlize Theron, those are quite good, and Disaster Artist, which was by James Franco, and was really great as well. I always stick to the film stuff.

RRFC: You recently did a film on the Syrian refugee crisis, yes?

Christine: Last year I did a film called Ya Albi. It’s currently going through film festivals right now. It’s again a short…I made it before the Muslim ban, and then the Muslim ban happened and the film blew up even more. It’s about a refugee named Aya who’s gotten access to come to the U.S. but then her husband is detained and can’t come over, basically, at the airport, which it’s crazy [since] that the Muslim ban happened…It’s a proof of concept for a feature, and now because of the times and events, it’s gaining a lot of interest in terms of changing it to a feature…We’re actually in the process of qualifying it for next year’s Academy Awards.

RRFC: What festivals has it played so far?

Christine: It’s going to be in the Hill Country Film Festival, which is at Fredericksburg. That’s at the end of April. I’m really excited about that one because I’m pretty sure that’s the festival that most often gets talked about…It has been in Nacogdoches, I think that’s what it is. It won 3rd place there. It was in Waco at the Deep in the Heart Film Festival, and it nabbed Best Texas Short Film…It’s been in a lot of stuff.

RRFC:  You’re starting on a new film project in May; can you tell us a little bit about it?

Christine: My May event, I’m really excited about it, is a short film called Shakespeare on the Range. It’s fictional, but…it’s about a group of inmates, life inmates who are going through a Shakespeare program. There are programs like this around the world. I did a lot of research, and apparently Shakespeare is a great tool for rehabilitation for inmates because they can find a lot of themes within it that relate to their life story and are able to relate and find introspection through it…You kind of get to see everybody’s backstories, which is the interesting part. So you understand how they ended up there. I think the reason why I wanted to do this is because I started to discover that I really enjoy stories about topics that people sort of sweep underneath the rug because it’s not extremely relatable or it’s something that they choose not to think about… I’m excited because we have a whole closed prison. It’s formerly Shreveport’s Caddo Correctional Facility, but they moved to a newer facility instead of the older one. So we have the whole place to ourselves. 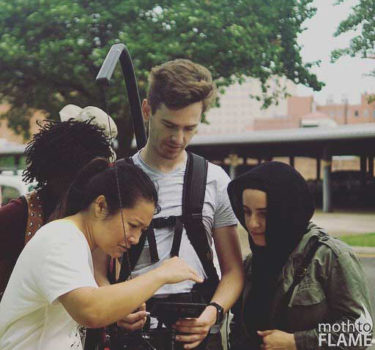 RRFC: So do you have any students helping you out on this project?

Christine:  A lot of people have volunteered to come…I wasn’t sure if people would want to come all the way to Shreveport to film, but apparently a lot of them are like yeah, and have family in Shreveport and stuff. So there are going to be five students that are coming…When we film at Shreveport, I’ve taken a very small team because it gets expensive if you’re shooting not in your hometown…This year because of the ground we had to cover and all the moving pieces, we’re going to have squibs, there’s going to be an armorist because there’s going to be fake airsoft guns and stuff like that. So we’ll get to play with all that. So it should be fun.

RRFC: Do you have any externs who are standing out to you right now?

Christine: Yeah. Autumn Connelly is great. She has done so well. I can really count on her when she’s on set…She’s been my right-hand man for small corporate films, and she’s gone on some short film sets…Stav [Bendor] has been awesome, too. He is editing a really big project for me right now with UT, and so he’s learned about coloring, he’s done a great job with that, and also highly dependable. Everybody is very gung-ho and excited. Anton [Savenko] is fantastic as well, and he’s cool. He’s from Ukraine…English isn’t his first language, but he’s doing fantastic…So yeah, I have a really good group this year. John Bechinina and Jon Grandstaff, they’re really great.

RRFC: Speaking of your students, do you feel that the Film Connection program is giving them a good window into the practical realities of filmmaking with these projects?

Christine: I think the fact that you connect students with real practicing filmmakers is very important. I think a lot of schools rely on theory, and that theory changes all the time, and whether it changes as fast as the industry itself is changing is debatable…So I think the best part is connecting students with current practicing filmmakers, because I feel like with film you learn most of it on set. You learn by fiddling around, touching things, breaking things, and trying things. And you learn through the connections you meet while you’re on set. I know a lot of the students have connected with each other through some of these sets and are also breaking off and working on their own projects with other people, and that’s great. It should be that way…That’s the way to learn, it’s to utilize the connections you meet on set and to watch, observe, and try. And that’s why the Film Connection I think works, is because you guys pair people with practicing filmmakers.

RRFC: If someone wanted to come and train with you, what qualities do you look for?  What makes you take notice that this person has what it takes, and makes you want to work with them?

Christine:  I can usually tell from your initial history or just attitude. I can tell if you are a self-starter. So people who come in and say, “Hey, I’ve already made this stuff. It’s not great, but I tried making this with whatever I had,” that’s usually a good sign. I had not too long ago an interview with someone who’s already operated and started their own business. Coming from a business owner, if you’re already that motivated to create your own business, I understand that takes a lot of initiative. People who are just excited and who follow up and follow through. Like after maybe the first month, you kind of can tell who’s going to put in the time and who’s not.

I need people who are proactive because I don’t have time to chase after people…I’ll send your monthly reminder, “Hey, if you have your bookwork, send it to me,” that type of stuff; but I cannot be over your shoulder and say, “Oh, you’re going to get a bad grade if you don’t finish this,” because that’s not reality. You either do it or don’t. So being proactive is really, really key. And being reliable is really, really key, because the stuff that I give students is real content. It’s not practice content that will never see the light of day. It’s things for clients, and if I can’t count on somebody, if I need this edited in two weeks and I never hear from that person or whatever, that’s a liability for me because that is a real project…Chances are if that happens I’ll probably put you on not as important a project because I can’t rely on you…

The film industry is about your reputation, I think more so than a lot of other industries. It’s so word of mouth. I’ve hired so many people just based off of what someone else said about them…Word of mouth, initiative, just showing up on time, and being proactive. Those are very important things to have. And just being excited, you know? I will take a student who doesn’t know anything but is excited about everything over someone who thinks they know everything and when they show up on set they feel like they’re entitled to be there. I have a big problem with that. I don’t think anybody’s entitled to be on set. I think we’re very lucky to have this as our full-time job, and “Hey, I’ll go get coffee for someone.” I have. There shouldn’t be any egos at all.