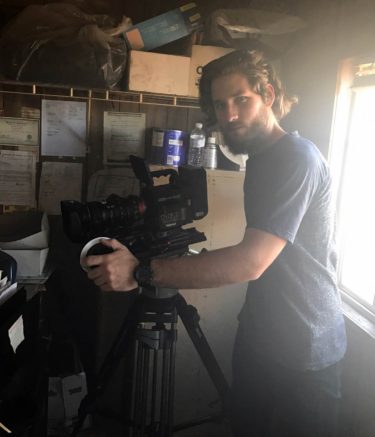 Caleb Dixon’s (Nashville, TN) first interest in film came as a 10-year old kid, playing with his parent’s old video camera—a practice which he says got him in a bit of trouble.

“I just started filming stuff,” he says. “Unbeknownst to me I was probably filming over a lot of old family events and reunions and such. So my parents started to get down my throat for that, obviously. But I would start making little home movies and skits, and I just really enjoyed it, editing and just figuring out different kinds of effects I could do and other fun things.”

A few years later, his interest in the camera was rekindled by his oldest brother, a broadcast journalist in the army.

“They sent him all over Europe, so he got to travel and shoot stuff,” says Caleb. “He’s always wanted to be a journalist, and then cameras just kind of came along with that…I was like, man, I kind of always wanted to film stuff too. So maybe this could be something I could get into. So maybe four or five years ago, when I was 15, I bought my first DSLR camera and started making little short videos.”

Despite Caleb’s interest in film, the idea of more schooling after high school didn’t appeal to him. “I was never super interested in school,” he admits. “I love learning. My whole personality type is just learning things…but school just wasn’t quite my speed…I didn’t want to go to college.”

Even while scoping out film schools in Nashville, Caleb says he was on the fence about the whole thing. “Everything just felt too class-oriented for me,” he says. “I just wanted a mentorship, I wanted something that was always hands-on, and also a little bit more affordable.”

When Caleb discovered the Film Connection could give him exactly the type of mentorship he wanted in his own home town, he was hooked. He remembers meeting up for the first time at a local Starbucks with Film Connection mentor Zac Adams of Skydive Films.

“He has a binder in his hands…he just came right off of a shoot to meet me,” says Caleb. So it was cool just to see, like this isn’t just like some mentor who knows something about the film industry. This guy is currently working on films, he’s invested, he’s taking time out of his day from a shoot to come and help me…It was really cool just to kind of hear his experiences of all the things that he gets to bring his student externs on. He was telling me some of the places that he’s taken some of his past students and some of the celebrities that he’s worked with in the last couple years, and really what sold me was him telling me all the shoots that he has coming up…I wanted to jump in as quickly as possible.” 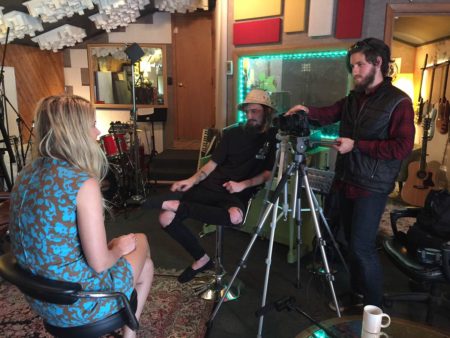 Since starting with Zac, Caleb has been completely immersed in the hands-on process of many different types of projects, both with Skydive Films and other leads Zac sends his way. Caleb estimates he’s been on more than 50 different shoots so far!

“Zac does a really good job of getting me into diverse shoots, so like different kinds of shoots, like music videos, corporate shoots for instructional videos for companies, short films, documentaries, whatever,” says Caleb. “He does it all, and he does a really good job of bringing us onto all of those things. So the learning process has accelerated because we have to learn as we’re doing it.”

That’s not all: Caleb has started landing his own gigs as well—namely, directing a music video for a hip-hop artist he met while participating in a promo shoot for Film Connection’s sister program Recording Connection—a shoot organized by RRFC’s regional director Becki Sessions.

“[He] talked to me because he saw me walking around with a camera,” says Caleb, “and he was like, ‘Hey man, I’m a hip hop artist and I’m always looking for people to film my shows.’ So I gave him my card…We’re doing a hip hop rap video. I think the coolest part about it is that it’s my first project that’s not under someone else’s film studio. It’s not something that was gathered up or brought together by Zac or anyone else…It’s kind of cool to be the person who tells people what to do and be the person who gets to create the direction of the shoot and the look and feel.”

That one connection has already blossomed into he and fellow Film Connection student Brandon Russell landing paid work in the Nashville music scene. “We have I think three other music videos for different artists coming out of that which are in the works or still being talked over right now,” Caleb says.

Looking back on his experience with the program and how he’s changed, Caleb sees how much fear he used to have, and how it made him hesitate in the pursuit of his dreams.

“Before I started the program, I was definitely fearful of situations I might be thrown into that I just don’t know what I’m doing,” he says. “I was afraid to really start anything at all, because I might not be good enough, or there’s always going to be someone better, so why even try? And that was kind of my mindset when I started…It was one of those things where I really just had to stop thinking about it and just do it.”

“I was just super glad that I did,” Caleb says. “I mean right now, I couldn’t really think of any other industry I’d rather be involved in…I just have a lot of joy in getting to learn and understand what I’m doing, meeting new people and having new experiences…I just ask questions. I get answers and I learn something new, and it makes me more efficient on set. So as far as fear goes, honestly, I think I can tackle anything that I set my mind to, because I can learn how to do it.”