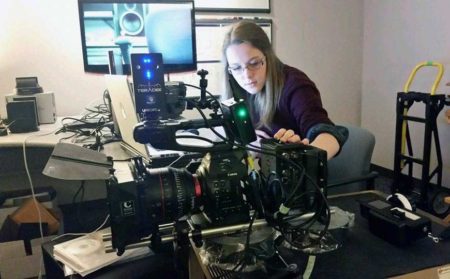 From the time Rachel Svatos decided she wanted a career in film, she knew she didn’t want to go the conventional educational route.

“I was looking for something that wasn’t the typical four-year college,” she says. “You don’t get to touch any equipment until you’re a senior thing.” I found [Film Connection] online and was like, ‘This sounds cool, and it might be better than trying to go through the typical college film programs where you have to take biology along with everything else.’ I found that kind of pointless because, for the most part, as long as you have experience in the field, I feel like you don’t need a degree for a lot of things. So I felt like getting a degree like that would be kind of a waste of time and money when I could be working, because if I were in college right now I wouldn’t get to work on the films that I get to work on because I’d have class.”

The decision paid off big-time. Since enrolling in the Film Connection with mentor Jason Van Sickle at age 16, Rachel (now 19) has been part of nearly 40 projects by her count, including 6 feature films! In fact, she says she wound up in a key position in her first feature film no less than a month after she started, and it immediately changed her point of view. 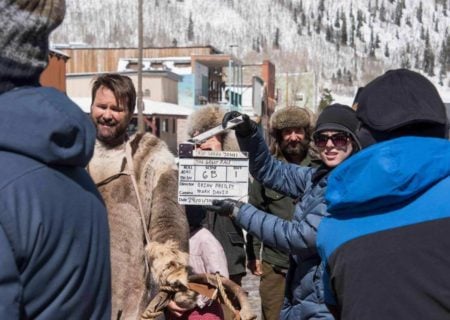 “About a month after I started I got on my first feature film,” she says. “That was fantastic. It was with my mentor and I learned so much, and I somehow ended up assistant directing the film because we didn’t have an assistant director…I used to go train at a studio that was for acting and for behind the camera stuff, and one of the tech directors was going through all of the different roles in film, explaining what each one of them does, and said, ‘The assistant director, well, they’re just the bitch on set,’ and moved on from that. I was like, ‘I never want to be an assistant director. That sounds miserable.’ Then through my first experience on a feature film set with the Film Connection, I figured out that, no, it is something I like to do, and they’re not just the ‘bitch on set.’ It’s much more exciting and fulfilling than was ever made out to me…I really enjoy it and find it fulfilling, and it’s something that I feel like I’m good at.”

Since that time, Rachel says the opportunities have just continued coming, largely due to the connections she has made and the experience she’s gaining. “Every project has kind of led to another project, more or less, and through different people every time,” says Rachel. “Recently I was just in Colorado camera assisting for a shoot that I got on through a friend that I met on another shoot. It just all kind of links together.”

A recent project of Rachel’s is a timely short film called Don’t Forget Us, a short film commenting on the recent election from the children’s point of view. The concept, Rachel says, came from an 11-year-old child actress named Morgan Gullett, with whom Rachel had worked on a prior project.

“She came up with this idea that she wanted to make a short film about the election recently, and how it affects the children and stuff of today,” Rachel explains. “I had wanted to do something sort of like that, but I just hadn’t gone through the trouble of making it yet. So she contacted me and asked me if I wanted to help her direct it. So we went through preproduction, found a screenwriter, and casted several children, and she wants to be a casting director when she grows up, basically. So she did the whole casting process by herself. We shot the project over the winter, right before January, when the inauguration was.”

Don’t Forget Us has gone on to the film festival circuit, winning the Best of the Best Film Competition in Los Angeles recently, and set to screen later this month at the San Diego International Kids Film Festival. Contrary to the presuppositions of other filmmakers, Rachel says it’s a pleasure to work with kids like Morgan.

“I feel like children are so creative and they want to be creative at such a young age,” says Rachel, “and that not letting them have the experience of being a real creative individual and always just calling them a kid and pretending like it’s kid acting, kid theater, all that stuff, it just kind of undermines their creative ability. So I feel like it’s not a problem to work with kids. You have to be patient with them, but I feel like you also have to be patient with adults, and adults can be worse sometimes because they’ll have attitudes and get bratty for their own reasons, just like kids will sometimes…So giving them the chance to really do something and really express what they want to do as actors I think is a fantastic thing.”

Now at age 19 and with so many projects under her belt, Rachel shows no signs of stopping. To her, it’s already a career, and she thrives on the high level of commitment it requires.

“There’s no way to get around the 12-hour day,” she says. “You kind of have to just love it so much that you’re cool with that, because it’s a lot of work, they’re long days, super long nights or full night shoots. I feel like you have to be flexible in not doing the same thing every single day. The 9-5 grind isn’t really what it is, ever…You have to be completely committed, I feel like, because there are the people who do the weekend projects and they have a normal job and day life. But I feel like that’s no way to have a real job doing film. You have to expect it to be your job.”