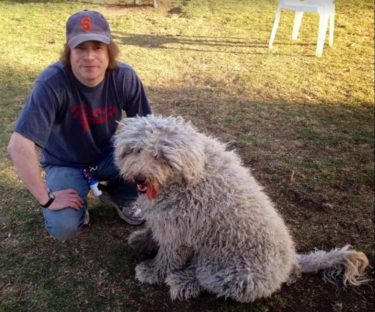 Film Connection screenwriting mentor Eric Abrams (Los Angeles, CA) is no stranger to the Hollywood film and television scene. Over the years, he’s written scripts for films like Crocodile Dundee in Los Angeles, as well as multiple TV shows like Married…with Children and Disney Channel’s Liv & Maddie. He’s also passionate about making sure his screenwriting students understand the structural elements of what makes a good script, and as you’ll see below, he insists on having them create an outline so they don’t lose their way in a 100-or-more-page script.

During a recent conversation with RRFC, Eric offered some practical, tangible advice on scriptwriting that we feel is pure gold for our students. The best nuggets from that conversation have been mined for you below. Enjoy!

ON DEMYSTIFYING THE BASIC ANATOMY OF A SCRIPT:
“It really starts from story. What are we really trying to say? I try to demystify the process, because I think most people with normal lives have not written a 110-page document, which is a screenplay…It’s a story. It has a beginning, middle, and end. What is the beginning? We introduce the characters, introduce the problem. In the second act, we have fun with the premise. Things get worse, things get really bad, things couldn’t get much worse at the end of the second act. In the third act, we resolve it. That’s every story. And of course there are a million variations, but I think once you realize that, it makes [you] breathe a little bit easier.

ON DEVELOPING TENSION IN A SCREENPLAY:
“You always want to make it as difficult as possible for characters, or else why are we watching this? Challenges met and mastered. You want to make it an obstacle course for them. The second act is when things are looking most grim…[Your characters] should always want different things. That’s how you get conflict…She wants him to get a better job, and he wants to get out of there as soon as possible. Those are two different wants, and yet they’re forced together and it’s going to be awkward. If they get along great, you probably don’t have a very interesting scene. We want that in real life, but not when we’re paying, what is it, $12 to see a movie these days.”

ADVICE ON CREATING INTERESTING CHARACTERS:
“I think [characters are interesting] because you can put yourself in them. Most of us are not on top of the world. I’m a mildly successful screenwriter, I’m able to support myself doing it, but yeah, I’m certainly not on the A-list. So I identify with these people that, you know, aren’t exactly where they want to be, but they’re never going to stop until they get there. And I think most people identify with that.

WHY RESOLVING THE STORY SHOULD BE BY CHOICE, NOT BY CHANCE—WHY THE MAIN CHARACTER MUST MAKE A CRITICAL DECISION:
It has to be—otherwise you really don’t have a narrative. One of the best pieces of advice I ever got was, and it’s certainly not original: Coincidence can get you into trouble, but it can’t get you out of trouble. I mean, sometimes it happens in real life, but it’s really unsatisfying as an audience member, like, ‘Wow, good thing that guy showed up.’ No, there’s no way you can count on that. That’s not good storytelling.”

ON WHY HE INSISTS THAT HIS STUDENTS CREATE AN OUTLINE BEFORE STARTING A SCREENPLAY:
“I don’t think [it’s possible to] spend too much time on an outline. I mean, I don’t like to write my name without an outline. It’s such a great safety net to have. That’s your story, and if you ever get stuck, you can refer to this…I think they should be at least 10-15 pages. Sometimes they’re really raring to go to script. I’m like, ‘Trust me, I get it. You will thank me when we nail the story down, when you actually do write it. Don’t go to script until we’re ready.’ If anything, it makes my job a lot easier when it just goes to script, but I prefer to do it right.”