Master of the Hustle: Film Connection grad Joe Paciotti gets gigs on The Voice and other big sets! 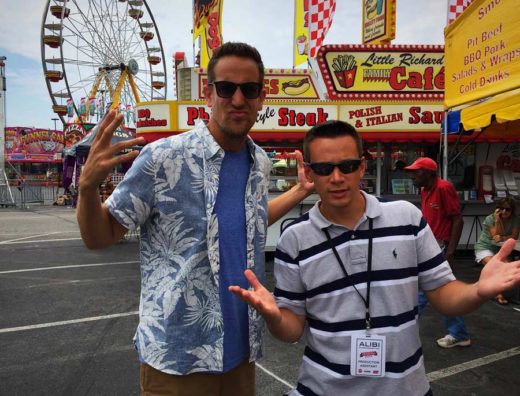 “It’s been weird lately,” says Film Connection grad Joe Paciotti of Philadelphia, PA. “Like every time I turn on the TV, I see someone I’ve worked with before. It’s the weirdest feeling.”

It’s a weird feeling most aspiring TV/film professionals would love to experience—but it didn’t get to be that way for Joe overnight. Since completing his externship with Film Connection mentor Nick Esposito, Joe has become a master of the hustle, working his connections, building his online presence, and taking almost any gig that comes his way.

“Once I graduated, I think my main focus was just basically getting on as many sets as possible,” he says. “When I first [graduated] I was doing a lot of volunteer short films and things like that, just to kind of get out there. And then all the volunteer stuff led to a lot of paid work, and that really helped me continue to build my resume.”

What kind of paid work? Gigs on NBC’s The Voice, for starters…plus opportunities to work on set for World Poker Tour on Fox Sports and various shows for The Food Network. Plus, he says he recently landed a gig with a marketing company serving multi-million dollar corporate clients!

“They’re actually based out of Texas,” he says, “and they basically hire camera ops from every state. I actually started as camera B with them and I pretty quickly worked my way up to the lead camera guy. And they’re working with some pretty big clients, making like $10+ million a year.”

It’s a huge jump for a guy who basically came into his externship cold and clueless. Joe says working with Nick in a real world setting truly prepared him for what he does now.

“Prior to the program I really had no actual professional experience,” he says. “I had no idea what an AC was or a director. I mean I heard the terms, obviously, but I never truly knew what they do…What I really liked about the program is you’re getting the hands-on training, and a lot of the people I talked to in the film industry, like assistant cameras and people that have been doing it for 30 years, they say they can care less about a degree. It’s all about the experience for them.”

Joe also says learning on-the-job helped him hone in on what he really wanted to do in the industry. “Actually for a while I wanted to be a director,” he says, “but then once I got on set I realized that’s not exactly what I wanted to be. I wanted to be a DP.  Because I [had] always thought the director would be the guy framing up the shots and doing the filming, but then I later realized the director is more directing the talent rather than the actual camerawork.”

So how does Joe get these gigs? For him, it’s a combination of networking and saying yes to as many opportunities as possible, sometimes regardless of the pay—because all of it leads to connections.

“Here and there I’ll still do volunteer work, which normally leads to paid work,” he says. “I’m always gaining new connections, and 90% of the time if I do a project, the client normally comes back for more videos…And even if some of these gigs aren’t extremely high paying…it’s still worth it because you’re getting experience.”

Joe also keeps his online and social media presence active, even taking a unique approach. “I’ll do a blog after every shoot,” he says. “I like to do a little promotion stuff to show what I’m doing. I think all that type of stuff helps too, because when people see you on these big gigs, they’re more likely to reach out and want to work with you.”

Even more recently, Joe has taken the next step, from pure freelancer to entrepreneur. He’s set up his own production company, J Pac Productions, and is formulating plans to take things to the next level financially.

“I guess still finding my way in some ways,” he admits. “In other ways, I feel like I’m growing every day. So in terms of my income and getting to where I want to be, I think I’m getting very close year by year. This year alone has been a huge jump for me in terms of the bigger projects and higher paying projects. So I think moving forward, I just hope to continue to increase my rates and eventually get to the point where I can…make well over what your average person would make working a 9-5 job.”

How does he aim to impress his clients? With a combination of confidence and service.

“Always a firm handshake, of course,” he says. “Always [make] a good impression. I try to do the best job that I can, no matter what the budget is. That way I leave a good impression, and it usually leads to more jobs down the line.”