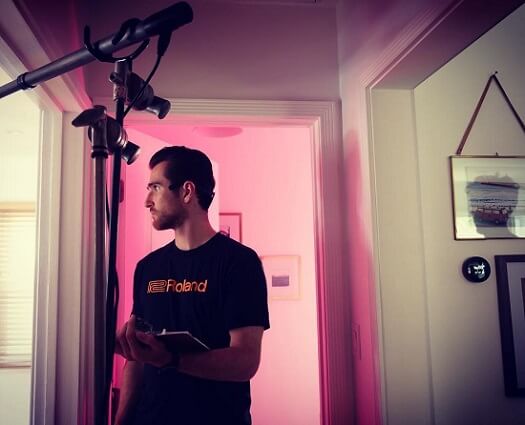 In 2017, Film Connection for Film Production & Editing graduate Steven Hadrych III volunteered to work an RRFC shoot at Roland’s Artist Relations Office in Burbank, CA. That gig led to him getting hired by Roland after their Video Production Manager, Marc Esquivel casually mentioned that a paid entry-level position was opening up. Steven walked his resume into Roland’s offices and was put on the payroll soon after that. Since that time, he’s taken every opportunity to work hard, learn, and say yes to the challenges that come his way. It’s paid off. He’s moved up to a fulltime position in Roland’s Video/Marketing Department where he’s producing, assistant directing, editing, and running the camera on studio shoots and live-streams.

So tell us about the killer exhibit you worked at NAMM this year.
“[At Roland] they knew I had a video switching background… … Because whether there are internal sales webinars or there are webcasts, [over time] I’ve gotten a more involved role doing video switching which entails me communicating with the team and calling out which shots to get… So at The NAMM Show this year, Marc cast me to run point on full Pro AV video setup. So that meant taking care of all of the plugins that go from our control room to the two LED screens. So, we had a front main stage LED screen and then we had one on the back that was outside the booth so people could see what was going on and could come in. So Marc would video switch the outside screen and I would switch the main stage LED screen. We had to run two video switchers so we could have independent control of each screen and make sure all the cables run to the rack that splits the signal out to both of those. I’ve had experience running video switching before, but never have I been tapped to basically do it from a ground-up design…That was an awesome opportunity that was given to me. I’m super grateful for that because not only did that go off without a hitch, thankfully, but I also learned a whole lot more about our Pro AV products.”

So it was a super technical job which had to be done on a very large scale which you had never done before. Were you nervous when asked you to do the project?
“When it came around to me, [I said, ‘Oh yes, I’ll do it.’ Then in the back of my mind, I’m like, “Holy cow, you haven’t done this before.’… I knew what needed to happen, since I’ve had experience with each of the video components in separate situations… I just had to make sure that we had the right amount of cabling… I made sure I planned everything out on a spreadsheet, and I had my inputs written down. There was going to be no questions asked on where is something going. As long as I had everything written down on the spreadsheet, it was one to one, and we didn’t have any issues.”

What’s another recent Roland project you’re proud of?
“One that I’m really proud of is the GO:MIXER PRO video because that one was a continuous 360° shot that involved three different locations. Ryan Rundle [the director] wanted to give a full scope of the product being in use in three different locations. So each location takes place in a half circle. Then it’ll wipe across the screen, then it goes into another setting. And getting the wipes right was key. You really had to have the camera in the right spot and communicate that properly to the crew so they knew that we had all the pieces in the right place…That one really pushed the limits of my knowledge of assistant directing, but at the same time, I grew from it. So I know I said this with you last time that we interviewed. I’ll say it again. The Film Connection really did give me the essential foundation that I needed to make it in the studio industry.”

So what are your long term goals? When you look ahead, where is it you want to go?
“Within the next few years, I want to make that step to being more of a DP (Director of Photography), shooting material more, and potentially, down the line becoming an assistant director or director. I’ve picked up producing, which I didn’t think I was interested in. And I even said it when I was in [Film Connection] but producing is a very interesting beast. You’ve got to manage the budget. You’ve got to find the right locations in the right time that hit the visual look the director is looking for. And you’ve got to get those call sheets out, make sure everyone responds back, knows where they’re going. Handle the invoices, close the budget, and so on. Of course, it’s easier said than done.”

So what enabled you to move up at Roland? How did it happen?
“The marketing team was going from national, in the U.S., to global. There was a need. They were already looking at the possibility to bring me on fulltime. It was just a matter of working certain details out. I was able to video switch, run a second cam [and] I had already done some assistant directing with Ryan a couple times. [Plus, they needed] an additional in-house studio editor to edit these in-house videos that were being shot about their new products and what their features were. They needed to have another person manage those shoots when they happened. And thankfully enough, I was around and was totally down to stay.”

It’s another classic case of opportunity meeting preparedness. What can Film Connection students do now to make the most of their externships? What’s your advice?
“When you go into it, really soak up all of that information because it’s the foundation of what you need to know in the industry. You guys cover all the assets of cinematography, lighting, different lighting styles and how to use those lighting styles to convey emotion or character traits and personalities. And then the three phases of production, what each role is responsible for. If it’s a bigger crew, you can have tiers of assistant directors and tiers of producers, and knowing how to generate a call sheet, shot list, a storyboard, scripts, outlines. The Film Connection sets the fundamentals up for us. As students, we’ve got to obtain and just soak up all that information because it lays the groundwork for what we’re able to do for the rest of our careers.”