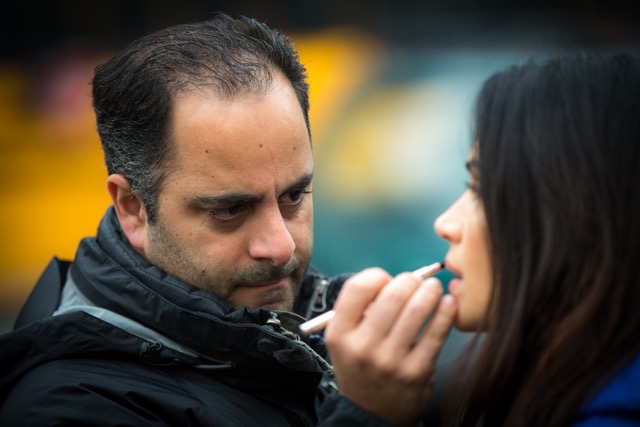 By the time David Presto (New York, NY) joined Film Connection for Film Production & Editing in 2006, he’d been on the periphery of the film industry for years, trying to find the “in” which would enable him to get to where he wanted to be—doing makeup for film and television. Thanks to his own persistence and the connections he was able to make while training with former Film Connection mentor Tony Travis of 2 Tone Films in New York City, David has worked on literally dozens of productions in both film and television. In 2019, David won his first Emmy Award for his work on the FX miniseries Fosse/Verdon.

Read on to learn more about David’s journey to the top.

What led you to Film Connection in the first place?

“What led me to it was just the networking aspect, just to meet new people, people with the same interests in the same field.”

So your interest in film and makeup, where did that start?

“When I was nine, Michael Jackson’s ‘Thriller’ came out, and then they had the making of it on MTV. So I watched the behind the scenes and was like, ‘Oh wow, this is really interesting’ and something I wanted to do. So that really got me interested in the whole makeup and makeup effects thing.”

What’s your favorite type of makeup to do?

Success did not come overnight for you. What was your mindset when you were trying to find your way into the industry?

“It was like, ‘I’m not going to do something else. I don’t want to do anything else.’ But you know, as an artist, that’s how it is in this industry. Especially in the beginning, you just don’t know anybody. You know your craft a little, and you’ve just got to find the right people to get jobs. And then once you build up trust, people keep hiring you. Then word gets around and that’s how you keep getting the next job and the next job after that, and you build [your] reputation. Then, once you have a good reputation, you just consistently work, and that’s pretty much where I am now.”

How long did it take for you to get to where you’re at today?

“I would say it probably took close to 10 years.”

What’s the most important skill to have as a professional makeup artist for film and television?

You can never say that, because this is still their face and what they look like is very important to them. It’s a very give and take relationship. You can always coax them into doing something that you think you feel strongly about and say, ‘Hey, why don’t we try this? And if you don’t like it, we can take it off and we’ll go with something else.’ You have to be able to talk to someone about doing that, and you never say no. You just try to work with them. That’s what the job is. It’s a lot of working with people.”

How did it feel when you found out you’d been nominated for an Emmy?

“When I found out about, I was really happy and humbled as well. And then when we did win, back in September, I was just so proud to be part of that show….I had just finished a show that was very difficult…then I jumped right onto Fosse/Verdon literally the next day….It was great making characters. We had prosthetics, we had regular makeup, a lot of hair laying and a lot of period, too. We went from the 40s all the way to the 80s. So there was a lot of different types of makeup in that show.”

So did you attend The Emmys? If so, what was that like?

“Yeah, my wife and I went. It was one of the best days of my life, one of the happiest times.”

What did it feel like when they called your name at the Academy Awards, announcing that you had won?

“My heart was beating out of my chest….It was hard to walk up those steps. I was like, ‘Just go slow.’ Yeah, it was very exciting. It was just vindication for all the hard work that we did that year. You just feel like you’re appreciated by your peers, because that’s who votes for it, which is even better. So it’s like, everyone thought that this was one of the best shows, which is very nice, too, for everyone to think that of your work and admire it. So it is a very nice feeling.”

What’s your advice to current Film Connection students on how they can make their dream careers a reality?

“I would say just listen to the mentors, the teachers….Not everyone is going to make it. If you want to make it, you have to be the one that is willing to go that extra mile to get to where you want to go….You have to always work at your craft consistently, and you consistently have to network with people. That’s the most important thing I could tell anyone, any student that wants to make it in this business, to do that. Never give up on your dream.”