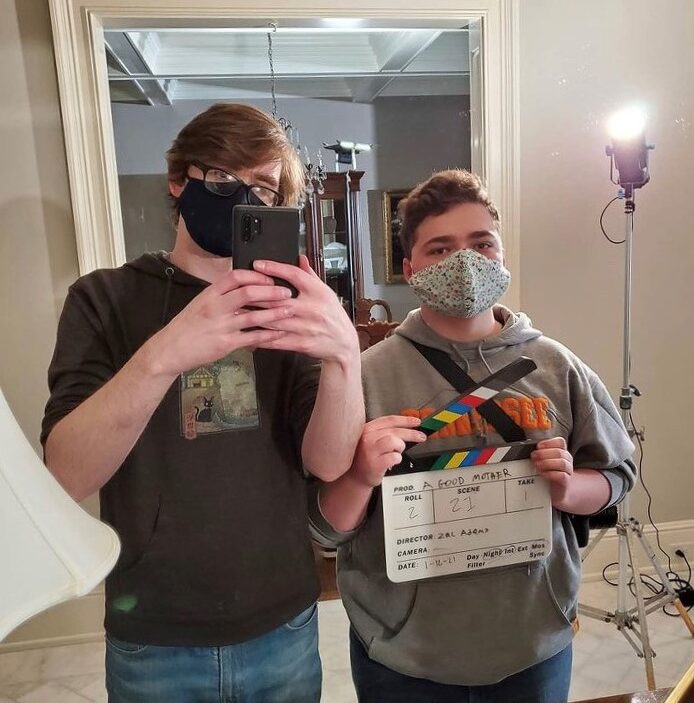 Film Connection graduates Carter Rutledge and Zack Wilson Parrish did their externship training with mentor and Emmy winner, Zac Adams, producer, director, and CEO of Skydive Films in Nashville, Tennessee. Aside from working on commercial shoots, music videos, and more, all three came together to write, produce, and edit the short horror film, “A Good Mother” which is currently being submitted to film festivals. We recently spoke with the filmmakers to learn more about the making of “A Good Mother,” their experiences in our 6–9-month Film Production & Editing Program, and more.

What brought you to Film Connection in the first place?

Zack: “I’ve always been interested in film and things like that…. I woke up one day nearing 30 and realizing that I hadn’t done something that I know that I love. Just a quick Google search for film schools in Nashville, you know, something I could do close to home [led me to] Film Connection [which] had the best reviews, and it seemed like a program I could get into pretty quick.”

Carter: “I had always been interested in film and video and kind of narrative storytelling through that…. A friend of a friend had done Film Connection… and I heard about it just like a two-sentence version of what it is, and I was like, ‘Woah, wait, that sounds perfect for me.’ So, right out of high school I looked into it and got involved and was paired with Zac [Adams, mentor].”

What was your knowledge of filmmaking prior to starting the program?

Carter: “I had been making short films with iPhones and DSLRs for, like, five years before just for fun and with friends and family…. I had watched a lot of movies and learned a lot about history and the Golden Age of Hollywood and all of those techniques, and how they came forth, and the innovation. But I didn’t know anything about what the industry functions like. Like, I didn’t know the job of a producer, you know. …

And then, like, instantly, a month after working with Zac, it’s, like, ‘Oh, this is how clients pay. This is how these different documents have to be set up before you shoot. This is what pre-production looks like. This is how long post-production takes.’ All of that, I didn’t really have a grasp on even though I had a grasp on, like, aperture and ISO and stuff before.”

Zack: “A lot of it was stuff that I thought I knew. You know, watching movies and kind of learning how they get made. But when I came in here, I didn’t realize how much work actually goes into it. I had made a couple short films when I was younger, but never really got into the guts of it and stuff. Anything with cameras was never my forte. [I had done] a lot of writing.”

So, how did “A Good Mother,” the short horror film the three of you wrote and made come about?

Zac Adams (mentor): “And then the three of us literally sat in my house for a couple days and ordered some pizza and just fleshed it out… over a day or two…. We all three got writing credit. And it’s on my IMDb now. We filmed at his [Zack’s] aunt and uncle’s house in Hendersonville… and we shot on the RED Epic, [with an] all-professional crew, friends of mine. And then we all did the editing at my house.”

Carter: “Yeah, and the screenwriting mentor, Paul Guay that I got paired with by Film Connection… in one of our meetings, I gave him the ‘A Good Mother’ script to read and he gave us notes on it and we took that feedback and changed some things about it.” Learn more about the shoot and Carter & Zack’s experiences in our Straight Talk video below!

Zack: “When we got… [to] shooting “A Good Mother,” I realized, like, ‘Oh, there’s a lot to this. There’s so many moving parts.’ And we had a lot of great people work on that, and they all are amazing at what they do. And I didn’t realize how much talent goes into something like that. And watching Zac keep his cool while running around doing a thousand different things is pretty awesome to see.” Read more about Emmy-winner & mentor Zac Adams who’s known for getting his externs in the driver’s seat!

So Carter, considering you don’t regard writing as a particular interest of yours, was training with screenwriter Paul Guay (Liar, Liar, Heartbreakers, The Little Rascals) beneficial to you?
“He was great…. After Film Connection, I have a much better grasp and maybe confidence in writing. Like, I feel like if I needed to write something, I could do it now.” [Carter earned both a writing and editing credit on “A Good Mother.”] 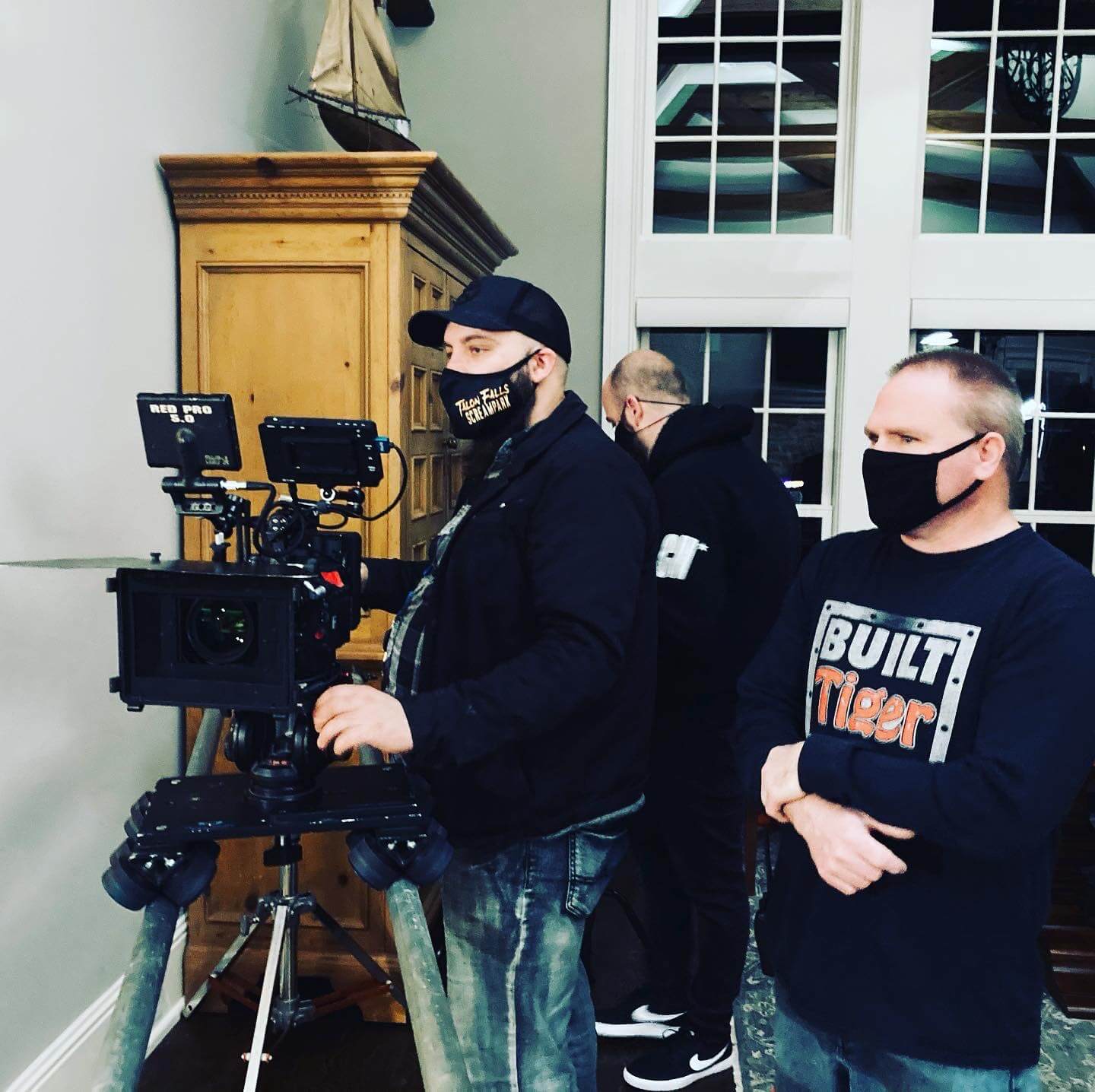 What are your plans going forward?

Carter: “I think I’m definitely leaning towards being a freelance DP to just get hired on anything that I can. And then, hopefully, make enough money to just do passion projects and direct. Hopefully, write and direct and shoot those. But yeah, as of right now, it’s just four days a week-ish, [that] I’ve got someone calling me for something to either shoot it or just be… a camera op [camera operator] or something along those lines. I really, really enjoy the shooting of things more than the writing. That’s why Zack and I work well together… because he loves writing and I like everything except writing.”

Zack: “We definitely all worked on the script for “Good Mother,” but seeing my name on it for the first time, especially when we made the poster, was the coolest thing ever. I want to keep doing that as long as I can.”…
I’m really glad I did it [Film Connection] and was able to make the connections I made and learn as much as I’ve learned. And I kind of can’t wait to get started on the next thing. Before, I had things I wanted to do, but didn’t have the spark of inspiration, as corny as that sounds. But now, after working on all of these projects, it’s like, ‘Oh, that’s all I want to do now.’” 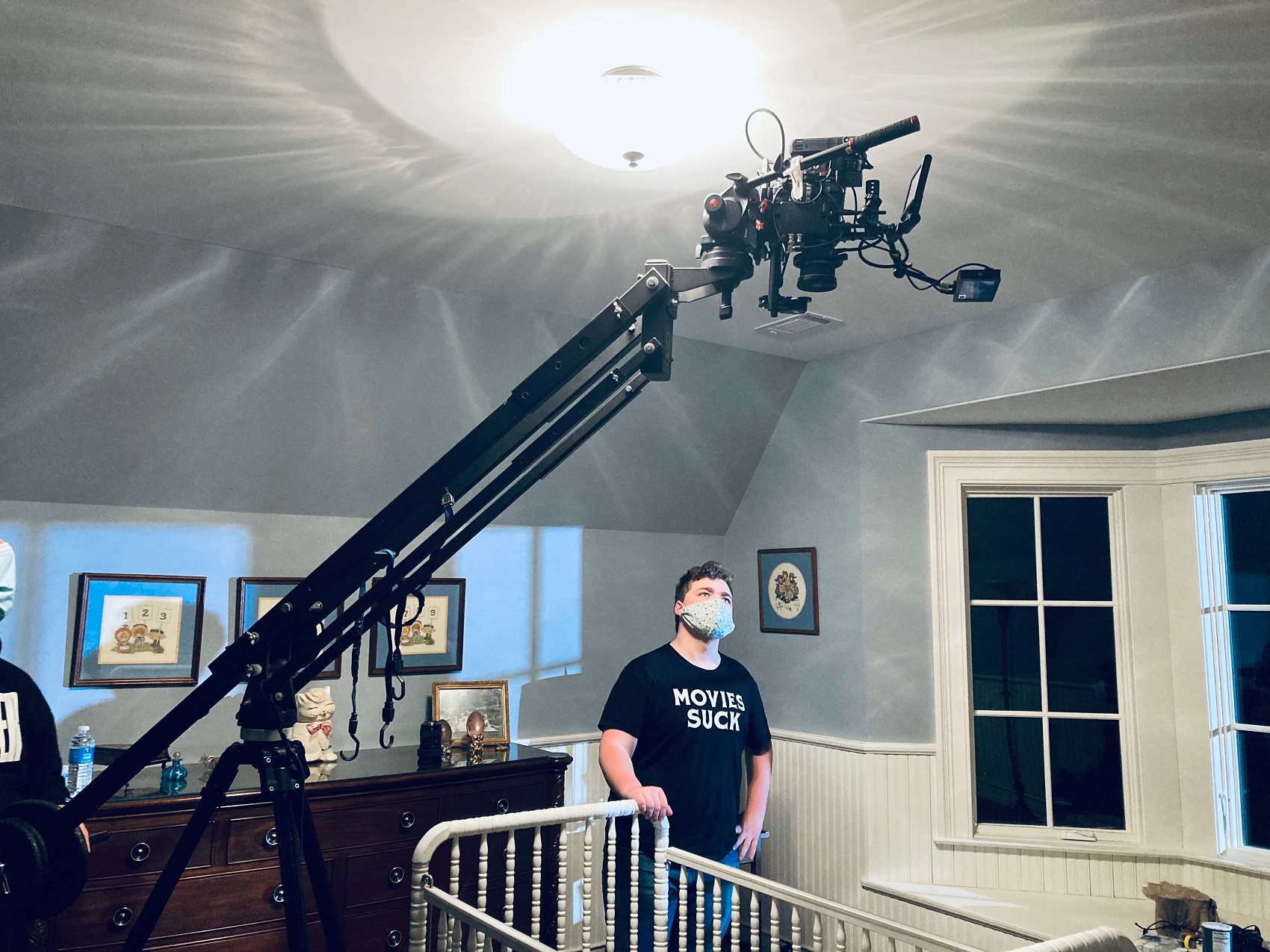 Carter Rutledge on the set of “A Good Mother”

Carter, now that you’ve completed the Film Production program do you have a better understanding of what a DP does and what’s required to do the job?

“Definitely, because everything that I did before Film Connection was just kind of, like, I’d do everything. And it didn’t always work out, you know? And so, seeing how a DP [cinematographer] can work with a director and they’re not the same person, is very interesting. And I’ve really enjoyed stepping into the DP role and having someone to bounce ideas off of, and talk through things with, and stuff like that.”

Have anything to say about your parents and their reactions to you doing the program?

Zack: “They are, it seems at times, more excited than I am. You know, when I’m worn out from doing something, they’re always, like, ‘What are you doing next? What’s the next project? Have you started writing this?’ Like, ‘Talk to Zac, maybe there’s something you guys can work on together. Talk to Carter, maybe you guys can start working on something.’ So, yeah, 100% support. Like I said, almost more excited than I am.” 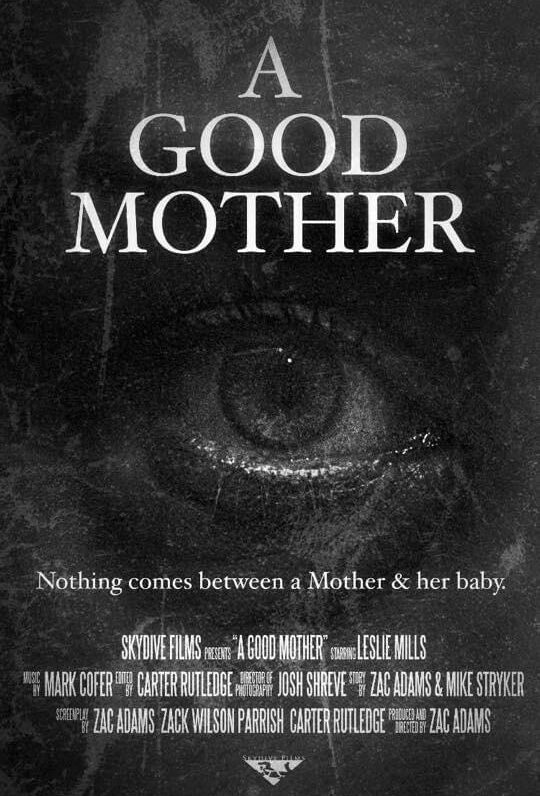 Carter: “My parents were very supportive and my grandfather helped me pay for it. My parents made sure to communicate to him that although it wasn’t a traditional program I was going into, it was what I really wanted to do. I have a very sporadic personality and I don’t want to be tied down. I like that the schedule is always new and there’s always something different on the horizon. I have found that to be really good and it helped my parents see that this program was great for me. Being able to come home after a shoot and just be able to have dinner and share with them what I’ve been doing has been great. Though they may not know the particulars of what I’m talking about, they can see that Film Connection was right for me.”

Zac Adams, what did Carter and Zack do right during their time under your mentorship? What qualities stand out to you?

“Well, they’re both very reliable, which is, believe it or not, tough to find these days with people [not] being on time and things like that…. They seem to work together nicely. Filmmaking is all about collaborating, in my opinion, with ideas, and on set. And they hopefully learned that when we did “A Good Mother” because they learned from pre-production, production and post, just the whole teamwork aspect…. It takes a full crew to really make a film. It’s not just one person. They both excelled in that…. And hopefully, what they’ve learned in the past seven, eight, nine months, whatever it’s been, they can take with them onto their own endeavors. Whether it’s their passion projects or client shoots.”


Carter, Zack, and mentor Zac Adams on “A Good Mother,” making the most of Film Connection, and more! 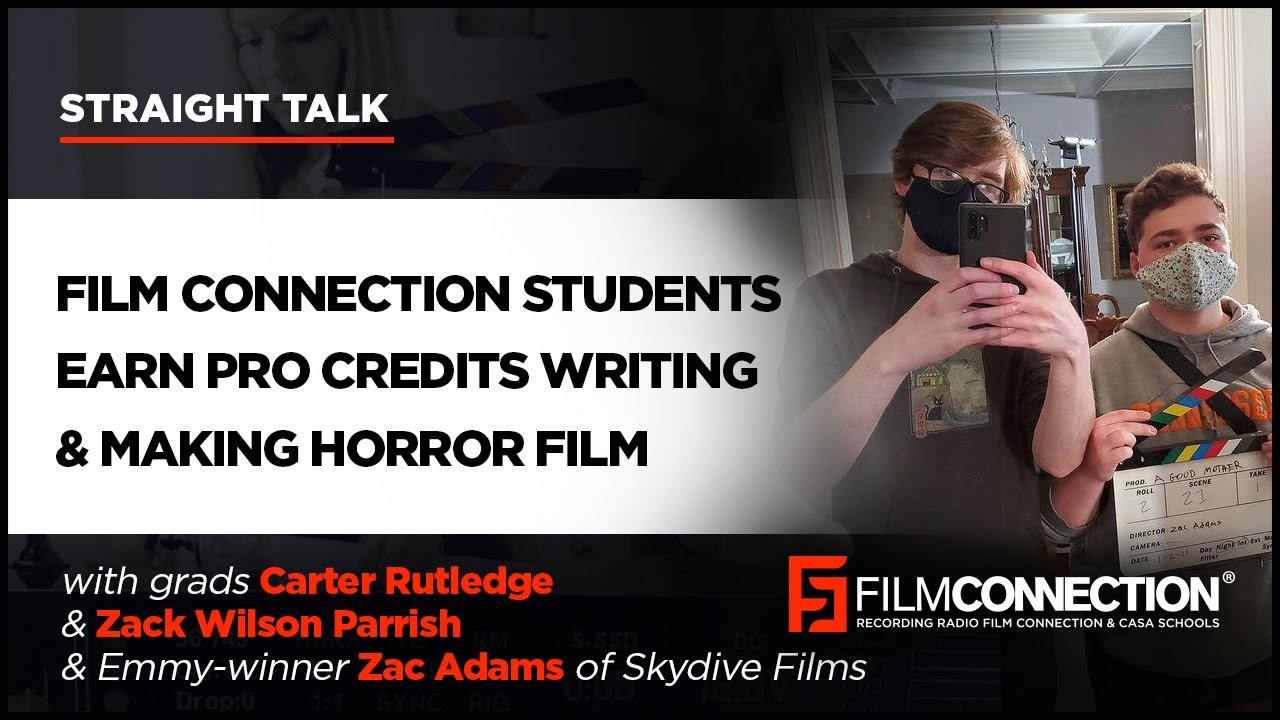