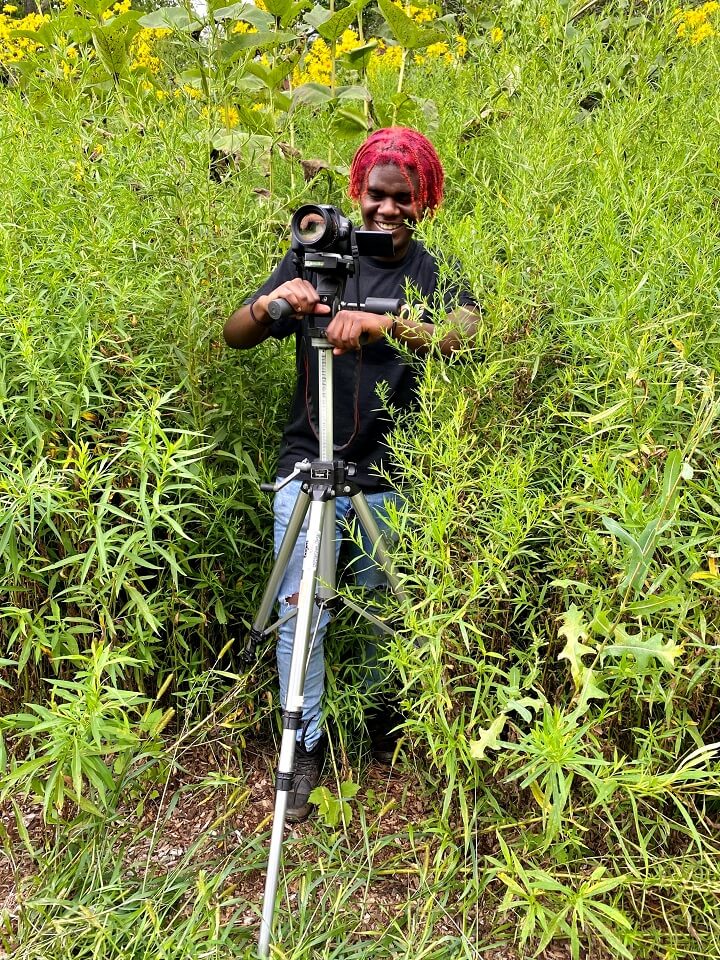 When Jaden Scott enrolled in Film Connection, he’d just graduated from high school with plans of attending NYU. The Covid-19 pandemic led to Jaden reassessing his gameplan for the future.

We caught up with Jaden just after he’d wrapped day three of shooting his short film, “IOWA” to learn more about his experiences in the program, get the scoop on the film, and get his advice on how to make the most of one’s time in the Film Connection. See how Jaden found his calling and got going at writing, directing, and editing in just a matter of months with one-on-one mentorship from the pros.

What led you to Film Connection in the first place?

“I started writing during quarantine. I tried to write a few scripts. Things didn’t come together. I tried to shoot a movie with my friends. Things didn’t come together…. I was going to go to NYU, but New York itself was… crazy at the beginning of quarantine. So, my parents were just like, ‘We don’t know. I don’t know about that.’ So… I always was looking into trade schools because I’m not really a school person, and a shorter program seemed like a fit for me. I think I just stumbled across the Film Connection doing Google searches. That’s how we’re here. Yeah.” Jaden tells how his screenwriting mentor, Aaron Feldman, helped him write his film “IOWA” in our Straight Talk video below!

How did your screenwriting mentor Aaron Feldman help you with writing your movie?

What’s your film about?

“The tagline that me and Aaron thought of was, like, ‘They’re out here looking for something, but in turn they find that they’re looking for each other.’ [It’s] about two outcasts that are kind of out in the middle of nowhere, and they end up finding each other.

That all developed from this idea that I had…. I broke my femur last year, maybe around October and November. It sucked. Right before I broke my leg, I was talking to this girl, and I thought we were hitting it off. Everything was great, and then I broke my leg. I didn’t have the chance to see her anymore. …

And me and Aaron were just going back and forth with it…. When artists get hurt, they end up making the best art. And that’s what I did. I don’t want to say I got hurt, but things happened, and I made art from it.”

While you were growing as a screenwriter you were also building your skills at filming and editing. What was it like training with Film Connection mentor Patrick Wimp at Digital Hydra?

“It was more like working a job…. Working actually under somebody rather than, you know, me working my a_s off to get good grades. And that’s what I like about the program. Working with Patrick is great…. Patrick taught me stuff about the day-to-day of being a director, a hustler… the day-to-day on sets. I mean I don’t know if I could have shot this film if I didn’t go on set with him to see the way that he directs people, or the way that he sets stuff up, or the way that he lined up the camera…. He taught me so much and so vividly and visually. …

He also showed me the world of editing and how that is, like, literally writing story itself. You know, he gives me these clips and he’s like, ‘Play with it. See what you can make.’ And we end up making great stuff through editing. I didn’t even think you can do that type of thing…. The freedom that he gives me, the trust that he puts in me to really, like, be the most creative me in the editing room is really what I love about it the most.”

Was seeing just how much work goes into filmmaking surprising to you?

“That blew my mind when I really realized it. Like, there are so many people that are on these sets and that work behind these things to make these 30-second clips or these movies that are an hour and a half. It’s, like, hundreds of people. It’s honestly mind-blowing to me. …

I feel like people don’t really think about the crews that are behind it…. I didn’t really understand it until I got to work with Patrick and see him shooting a commercial or him shooting this corporate stuff…. We are those people who actually do it.” 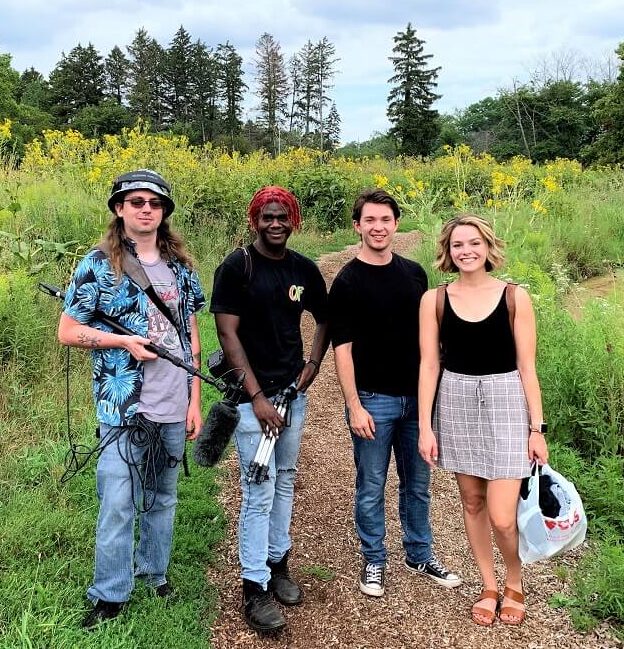 “Everything that can go wrong will go wrong. But that also makes those funny moments, these story moments… when the film eventually does come out and it makes it, I think I’ll be so happy to see it happen after all the dumb stuff that I did and went through to make it.

But yeah, otherwise, it’s going great. I mean I love my actors, and I love my small, little crew. It’s only about four or five of us. You know, I go on set every day. I’m like, ‘You guys ready to make a movie?’”

How did you find your actors?

“I held a casting call for the first time. It was just me in the room and I gave callbacks to the actors. Some of them were over Zoom, and I interviewed some guys in person. It was awesome. It was really like being in the movies, you know. Like the scenes in La La Land when…I think it’s Emma Stone, where she does that casting call. Like, that’s really how it is. Somebody’s standing in front of me, and I’m sitting there with a paper, looking up at her and she’s the reading the lines…. It was one of my favorite parts of this process.”

What’s your advice? How can other Film Connection students make the most of the program while they’re in it?

I knew that I wanted to write, and I knew that I want to direct…. Like, me and Aaron… I had to tell him exactly what I wanted and how I wanted to do it and he gave me the help and the direction to make those things happen. Same with Patrick…. When I’m in the editing room, I… [ask] him, like, ‘Hey. Can I do this, this, and this?’ He’s like, ‘Yeah, but do it like that, that, and that.’ And I’m like, ‘Oh, you’re right. You’re right. That would make more sense.’ So, it’s all about, I feel like, knowing where your path is and knowing how to get there and ask those questions towards your path.”


Jaden Scott on Growing as a Writer with Help from a Screenwriting Pro. 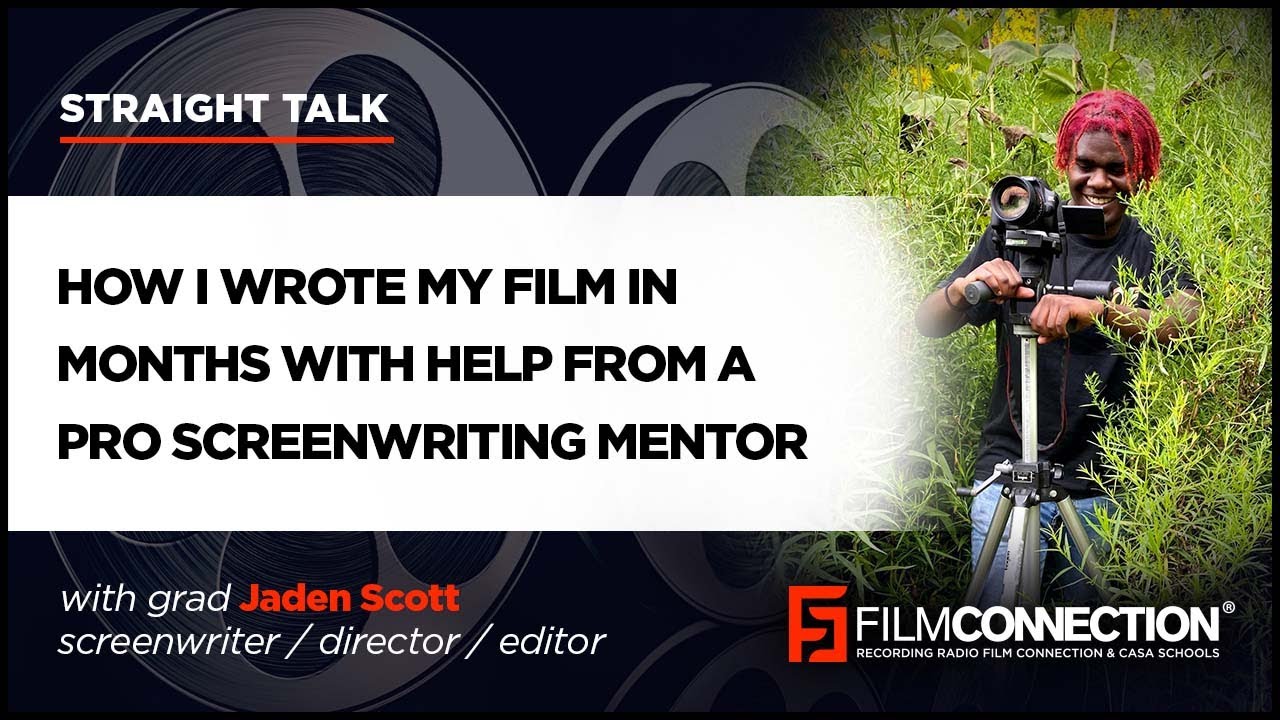