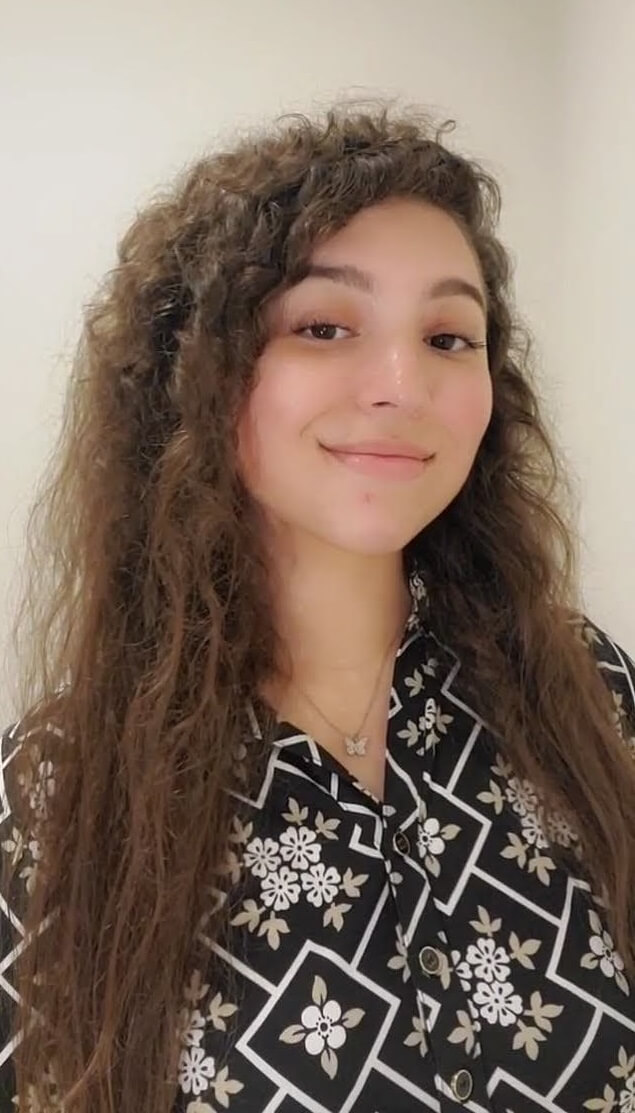 When Film Connection graduate Hannah Salazar came to us she had a newfound interest in editing and a lot of curiosity about her career path. After training with mentor Roger Zamora Chavez of Rogy Productions and some real-world experience, Hannah’s got a clearer vision of the future she wants to build and a job at Encore (formerly PSAV), a global leader in events solutions and audio visual, so read on!

So it was gaming that ultimately led you to Film Connection. Could you explain that for us?

“I am a gamer…. So, on the PlayStation 4, you have the option to save clips or actually record, or you could live stream on there. And I play a lot of video games and I happen to catch something that’s like, funny or if it’s like, weird or scary, I tend to save clips. …

[When] I first started editing, it was through the PlayStation 4 console because they have like their own little editing program in there. And it wasn’t… How do I say this? The effects and the timing of things wasn’t fast enough for me. I wanted things to be really fast and I wanted, you know, some subtitles to disappear or I wanted them to move a certain way. And the program on the PlayStation 4 it wasn’t really capable of doing that.

And that’s when I got into Adobe Premiere Pro and I was dabbling in it for quite a while. And I learned how to make subtitles like, shake really fast or like, they would have some sort of effects to it. And that’s kind of where I get very tedious and I want things to be a certain way.” Watch our interview with Hannah in our Straight Talk video below!

And that led you to Film Connection and your mentor Rogy Zamora Chavez of Rogy Productions. What was training with Roger like?

“Training with him was a lot of fun. He encouraged me to tag along with him and help him with the projects that he was working on. And he taught me every… Like, not everything but he taught me the basics of how to work Adobe Premiere Pro. And since then, I’ve just experimented and played with the program itself on my own time.”

How’d you feel going in to meet with Roger and interview with him at Rogy Productions?

“I was very excited because I saw some big flat-screen TVs and I saw some monitors and a cool-looking keyboard and all of the equipment and was just really excited to just jump in and start editing and learning and all that good stuff.”

What did your parents think?

“They were impressed but my parents are… they’re a whole different generation. So, they were just… going with the flow of things and they didn’t really know what to expect.” 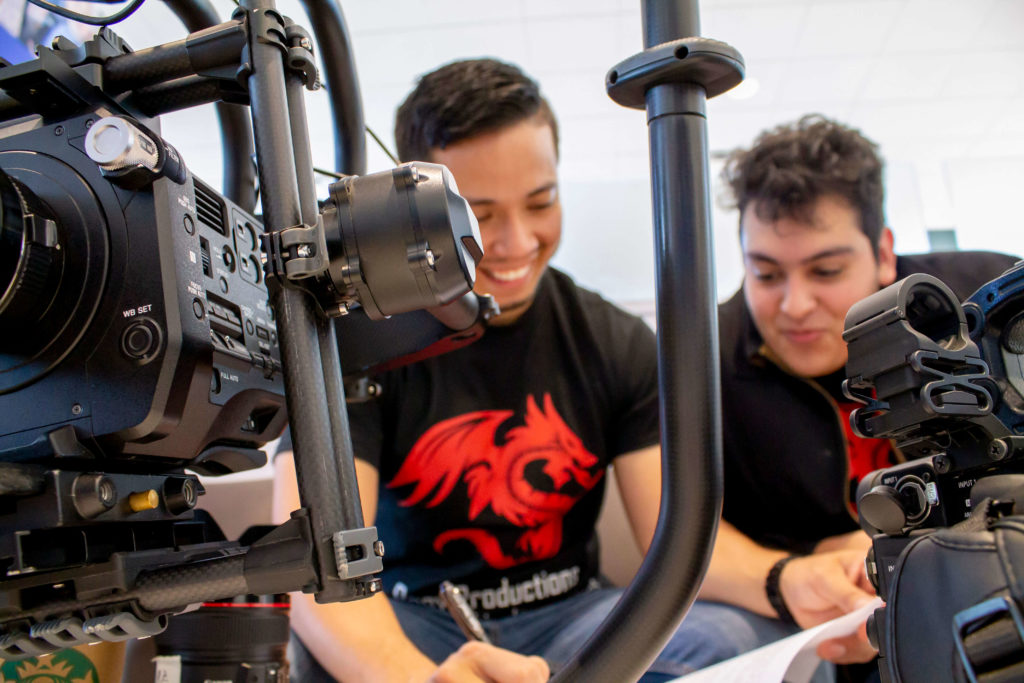 Okay, so let’s flashforward to Encore. How’d you hear about the job?

“My career advisor had emailed me about this job opportunity. And if I was interested, to watch the videos and read the job description that was provided in the email. So, I did just that, and I was intrigued and interested, so I applied.”

Did we help you prepare for your interview at Encore?

“Before the interview, my career advisor had called me… to go over some interview questions they could possibly ask me. He gave me some advice so I could go into the interview confidently…. [And] I got the job in the beginning of January.”

What’s your role at Encore?

“It’s an audio visual technician role. They deal with a lot of moving equipment like projectors and projector screens and speakers and microphones. So, we just move equipment to certain break rooms or ballrooms and we just connect everything, we set up everything, we make sure everything is running correctly. And once the conference or event is over, what we call, we strike it down. We strike down all the equipment and we just put everything back the way it was.
Encore is a really good company… and I personally believe it’s a good steppingstone.”

So that’s your job today. What are your future goals?

[In the long term] I want to be in the post-production side. I want to be behind the monitors and the screens. I just want to be editing videos and yeah, that’s where I want to be.”

What’s your advice? How can students make the most of Film Connection while they’re in it?

“My advice to the Film Connection students is always ask questions because if you never ask questions, you’ll never know…. Share your ideas or thoughts or your input… and just be open to taking criticism.”


Hannah Salazar Shares Her Journey into Editing, Her Job at Encore, and more! 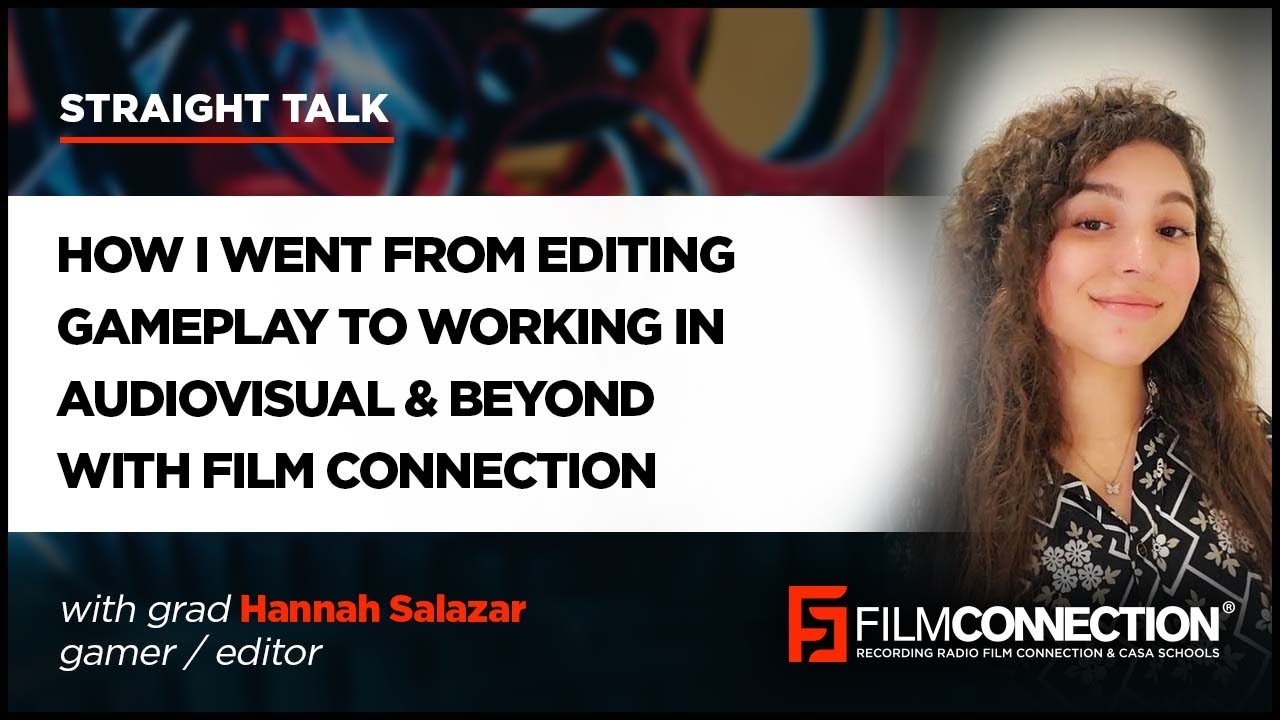