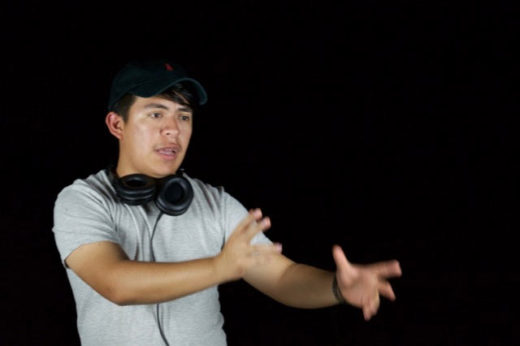 When Film Connection grad Jonathan Ramos recently told his family that he’d landed a job at Univision in Atlanta, GA, he says they didn’t believe him at first.

“They watch the news, the Univision where I’m working in Atlanta,” he says. “They watch it, and I told them, yeah, I’m going to work with them…they’re like, ‘No way.’ …And once they found out I was, they were excited. And they are like, ‘Wow!’ It’s funny because they started telling their friends.”

Perhaps a sign of the times, Jonathan says he first got inspired to pursue a career in film and video by watching YouTube videos—in particular, a set of videos from the filmmakers at Wong Fu Productions.

“It’s a group of three agents that met in college,” he says, “and they just decided one day they wanted to do films together, and they just started recording, uploading the stuff on the Internet, and people liked what they were doing and it kind of blew up from there…They have the liberty to do what they want creatively, and they get to share that with other people through a source, through YouTube, and people appreciate their work. That’s what got my attention, like I wanted to do that stuff too.”

Finding an affordable film school was another story, though—until he discovered the Film Connection.

“I was working at a construction with my uncle and my dad,” says Jonathan, “and I couldn’t go to college because they are expensive. So I was trying to find an outlet…I was just hoping I could find something that would be in my interest and wouldn’t be that expensive. I was just on the Internet one day looking at film schools, and I found the school Film Connection…it was very affordable compared to other film schools.”

Jonathan was placed as a student extern with award-winning filmmaker Jason Winn in Atlanta. He remembers being apprehensive on his first day at the studio.
“I was really nervous,” he says. “All I knew was that filming was really cool and interesting, but technical-wise, writing-wise, I knew nothing. I kept thinking, ‘Now, what if I go in there and they expect me to know how to work the camera or know what all these film terms are?’…

But when I met [Jason] he was very cool, chill guy. He’s very free, he’s open minded. When he first met me, he was just telling me how things work…He was like, ‘Hey man, feel free to ask me anything. Don’t feel nervous about it or anything.’ I felt comfortable because of that.”

Jonathan was particularly impressed with Jason’s calm directing style in working with people. “He has actors, producers, he has the PAs and he has all these other people,” says Jonathan. “The staffers, the DP, they are all leaning on him, but he doesn’t show his stress in front of them. He maintains his cool…I’m like, ‘I like how you maintain yourself. You don’t go crazy or anything. You don’t scream at any other people working with you.’ He was like, “Yeah, man. You’ve got to do that, or else if you start losing it, then they lose it and then the whole movie loses it.’”

At the same time, Jason employed a unique exercise to help his externs get used to working under pressure: an assignment to write and shoot a ten-minute silent film.

“When you are [shooting] the scenes, you have to do each scene within 10 minutes,” says Jonathan. “He times you. So, for one scene if you do it before 10 minutes you are okay, we move on. And if you don’t do it by 10 minutes, it’s fine, but you are losing time…He’s trying to make you feel the pressure so you can get used to it.”

Jonathan’s training and on-the-job experience with Jason certainly paid off, as it helped to land him the job at Univision.

“I found Univision’s number,” he says. “I just gave them a cold call, I’m like, ‘Hey, I was just wondering if you guys are looking for production assistant or need helpers? If you are let me know, call me back.’ And then they called me and they told me that they were looking for a camera guy for sports… They told me to show them my resume and asked me basic questions…I was interviewed by the manager from that department…Then in a couple of weeks I was working with them for their sports category.”

Now gaining even more experience with his paid gig, Jonathan continues to work on writing scripts, preparing for bigger steps as a filmmaker. “I want to write stories that make people feel something at the end of the video,” he says. “For me, it’s like I better focus on this film stuff or else I know I’m going to go back to doing construction, which is something I don’t want to do. I need to be on my game.”