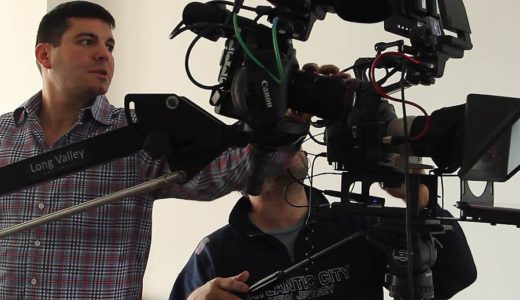 RRFC: So let’s talk about your journey into film and video production–how you became interested, your training, and how you ended up starting your own company.

Adam Lebenstein: When I went to college, my goal was to become a sports broadcaster. And I went to Ithaca College, and I did some sports radio, and I hosted some television there. And while I was hosting television, I kind of got into all aspects of it, the cameras, and what it takes to really produce a show, rundowns of scripts, and seeing it all come together, and I enjoyed the producing part of it…Then at my first job out of school, a startup TV network called College Sports Television, what kind of caught my eye was the features department, which was doing short stories on athletes. And they would send a few people out there with a camera and a microphone, basically, and send them around the country, telling these short stories on athletes. So that was kind of where I determined I wanted to be, and I kind of weaseled my way into that department, from originals to features. So I got a lot of cool experience traveling around and being part of larger crews and seeing how these guys who were a year or two ahead of me were doing it with lighting the interviews, and all the aspects of it. So I was doing that for a couple years. And then an opportunity at another company came up to be part of a series that aired on the NFL Network…and I stayed with that company and worked on events for them and different sorts of programming that I hadn’t really done before. It was kind of a permalance position over there. That’s when I launched my own production company…I just kind of went out there and started hustling and building my company.

RRFC: What was it about the features that you really liked? What was it that spoke to you?
Adam: I think it was kind of the storytelling aspect of it. A little bit of it was the excitement…was getting out of the office and kind of being on set, being out with people, meeting new people. And you really got to see all aspects of production. You got to see it all together because you would shoot it, and then you would take that back and work with an editor and put your piece together. The nature of it was definitely exciting as well.

RRFC: You said you sort of “weaseled” your way into features. What did you do to be proactive? How did you get yourself onto that team?
Adam: Well, I think buying my own camera, which was the same as the one they were using was kind of a neat little trick because things would come up where they would [say], “Oh, everyone is booked on something. Where can we turn next?” And there I am, smiling, holding up the box my camera came in. So it almost forced them into throwing me out there when I wasn’t quite ready…You’re right about just being proactive, just telling other people what you want to do, and keeping an ear out when other people are on the phone and maybe discussing a problem or saying, “Oh, I don’t know who could do that.” And kind of being around there to volunteer and say, “Oh, I could tag along. Send me out there.” That sort of thing.

RRFC: So in the past few years, entrepreneurship has become such a huge thing in this business. As you started your company, were you seeing the changes in the culture, and how did you adapt?
Adam: The big thing was kind of the move to digital. It was every company needing a website. And you couldn’t really predict the video explosion, but you knew that there needed to be low budget video solutions that weren’t just for a TV platform. I think that’s kind of…I kind of hit it at the right time where there was a huge audience of people who needed web video, and it was growing by the day. And that was kind of what I was playing towards, was servicing that…As I got more and more experiences and moved into this corporate world, I had more agency experience and marketing company experience. Agencies are very niche and they’re set up that way. It’s like, “We have our creatives. We have our art director. We have our copywriters. Copywriter writes. Art director does the art, does the visuals.” They kind of look at production that way….But that’s not how I look at things. I look at my greatest asset being resourcefulness. Whatever your need is, I’m going to find a great solution for it.

RRFC: How does all this tie into the experience your Film Connection students receive when they extern with you?
Adam: The experience you get when you become a part of our company is [that] you’re not going to be doing the same thing every day. You’re not going to just be sitting there going through your chapters. You’re going to go on 10 shoots that are all very different. Some of them are sit-down interviews. Some of them are what some people would consider boring, maybe filming somebody working at a computer screen. And some of them are bigger budget productions with weeks of preparation and prop creation and set design. All sorts of things like that are projects we’re working on right now. You’re not going to get a single-track experience…You definitely see all the different parts that go into this industry when you come work here.

RRFC: Can you tell us about some of your students and how they’ve done? 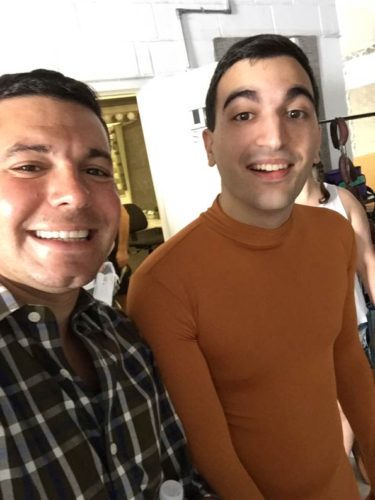 Adam Lebenstein and Film Connection student Anthony Zaccardi on set of Tum’s commercialAdam: Sen Floyd…was a very talented kid who was also a Tribeca Film student. And I think he’s out there pursuing his path, kind of making his own name for himself right now as a DP. I had another Film Connection student named Carlos Gonzalez who went back to the Dominican Republic. But he was great. I mean, I used him as just like a production assistant constantly. He was by my side on all my kind of one-man-band type shoots. Miguel Duval, another one…he’s out there in the industry right now, doing an array of things that have come from his Film Connection learning. He’s helping out gaffers and grips. He’s working with some of these gimbal systems, like Ronin and the MoVi…kind of finding his niche in the industry. And currently, I’m working with a student Anthony Zaccardi. When he first came to me they mentioned he wanted to be like a grip. He wanted to be working on trucks and working with the lighting. So that’s what I catered his experience to, and he helps a lot with equipment pickups and returns but we’ve also used him as an actor like in the photo to the right and all sorts of different ways …Another Film Connection student I had was Taj Francois. And he’s doing great things right now, too. He ended up working with me after the program as a paid person. He actually just worked on a Frank Ocean album release video that I helped set him up with and now he’s doing bigger and better things, but he was one of our in-house editors for over two years.

RRFC: So he got hired on by you?
Adam: Yes, he was hired on by me and Miguel Duval also receives pay as a production assistant on a large portion of shoots.

RRFC: When someone comes in to interview with you as a potential Film Connection extern, what qualities are you looking for?
Adam: There’s a couple things that I look for. One of them is presentability. I plan on taking these people on a lot of different sets to a lot of different companies, and you have to kind of know how to behave, how to act. Not on your home field, but where these people work every day. And you have to know that you’re entering their business environment, and you have to be respectful of that. So I do honestly look for people who I know will behave responsibly, dress responsibly, act responsibly in these settings. Obviously, eagerness and a positive attitude, a team attitude of wanting to help whoever is there…occasionally you do have to get coffee…I am definitely looking for people who I don’t think are going to feel that any task is beneath them or have an attitude if they’re asked to do something like that.

RRFC: When someone’s working with you, do you have any tips for how they can move into more responsibilities? How can people impress you enough for you to say, “Yeah, you’re ready for the next thing”?
Adam: Be on time. Miguel Duval, who is one of my students, he was a half hour early for call time almost every time. He would call me 45 minutes before he was supposed to be on set and joke with me that I’m late. So that sort of thing tells me, from a responsibility standpoint, that I can count on them, and that they’re going to be there when we have a shoot…[One student] did everything I asked—he would climb a tree to rig a light if we needed him to—but he commuted from 45 minutes away and would run into issues getting to set on time. So that was kind of a red flag for me. Even though once he was there, everything he did was great, but I just wasn’t sure I could count on him as a paid employee. So that’s one of the things, is being on time, being responsible.

Asking questions can be a good thing…Not even just asking questions, but updating me. If you have a problem, you don’t have to try to figure it out yourself. Come and talk to me about it and tell me what’s going on. Communication is huge…Nice, open, honest dialogue. If you’re able to do that, that tells me that you’re ready for more responsibility…It’s more the overarching things with like deadlines, timeliness, just keeping an open dialogue about that stuff. And also correcting mistakes…Those are things I look for to know when it’s time to kind of move somebody up. It takes experience, it takes time, and seeing them get better over time.

RRFC: Any other advice to offer?
Adam: Film Connection is about getting that real-world experience, being out there in the field…One thing I didn’t mention was one of the things that student externs get when they’re working for me is, it’s not just about me. I’m a production company of 5 to 10 people doing cool stuff, but I have a network of 20 to 30 people in all these different roles I mentioned. And so, they get to work with all them, too. They hear it from all these different people. We all help each other. Some days my sound guy says, “Hey, I need an extra set of hands.” Sometimes a different director says, “I need an extra set of hands.” Sometimes a cameraman says, “I need a camera assistant.” So you don’t only get the experience of working for me, but you also kind of become a part of this network and have, not just me, but 20 other people you can call on, you can ask questions to, and hopefully who you can work for when you graduate.