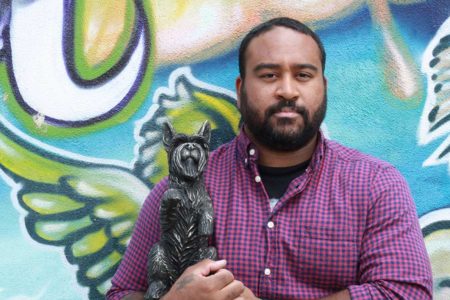 Film Connection screenwriting graduate Mark Salcido reflects on a key moment when he first discovered his desire to be a screenwriter.

“I think it’s kind of funny, because a lot of people…say like these big epic movies that got them into writing,” he says. “But I saw the movie La Bamba, the Ritchie Valens story…I don’t know why, but I was hooked on that. I thought, ‘Wow, that is freaking fantastic writing.” And right there I was just like, okay, I want to do that, I want to like write for film…I think I was probably like seven or eight.”

After taking some screenwriting classes at a local community college in Los Angeles, Mark says he was drawn to the Film Connection for its one-on-one mentored-externship approach. “[In class,] there is you and like however many students, and the teacher is kind of generalizing a lot of stuff,” he says. “In a way, you kind of don’t feel like you want to have to keep raising your hand, because you’re taking up everybody’s time. So, the whole one-on-one process is definitely helpful.”

When Mark first met with Film Connection screenwriting mentor Peter Foldy, he says they hit it off right away. “We just started talking like we were just two fans of film,” says Mark, “just regular guys, just having a conversation…I guess he liked what I had to say and saw the passion that I have for writing, and he thought, ‘Okay. I’m going to take him under my wing.’”

When it came time for Mark to turn in the first few pages of a script to his mentor, however, the tone changed. Peter didn’t mince words, and Mark faced a wake-up call. “He was just like, ‘What is this that you just gave me?’ I said, ‘This is my script.’ He goes like, ‘Is it…? I know it’s supposed to be a comedy, but I don’t think this was funny. You got your format wrong. You’re doing this wrong.’… I’m not going to lie, I was a little hurt, because I was just like, ‘Man! I thought I had been doing this right.’ But it helped. He was being blunt with me, and I took that and I thought, I’ve got to step up my game.”

After the initial wake-up call, Mark took his mentor’s words to heart, and he says his screenwriting improved immensely. “He taught me how to pace my stories correctly,” he says. “There is a lot of things he actually helped me with in my writing but the biggest thing is that he told me, ‘If you want to go for broke, go for it.’ I know there are writers who tend to hold back…He’s the guy, he’d say like, ‘If you want to push more, do it. You can always edit it later and something good might come out [of it].’

Since graduating the program, while he works on getting his first script picked up, Mark has been putting his writing skills to work in other ways, picking up blogging and other writing gigs for sites like Screengeek.net. Coincidentally, while working his own connections, he also landed a writing gig for Daniel Lir and Bayou Bennett of The Dream Team, who also happen to be Film Connection mentors!

Besides honing his skills, Mark says the Film Connection program has given him perspective on the career he’s currently pursing as a screenwriter.

“I kind of had this whole fantasy world before I took the course, about how screenwriting was in Hollywood,” he says. “Taking the course kind of helped me lure myself back into reality and see how much of a competitive world it is.”

That being said, Mark also says he has a newfound confidence in his craft. “My writing has almost come to be like second nature,” he says. “I’ve gotten to the point where I go like, ‘Give me a laptop, give me an idea, and I’ll give something to you in like 20 minutes.’”