Film Connection student Juan Armijos gains a realistic perspective of the industry while honing his craft! 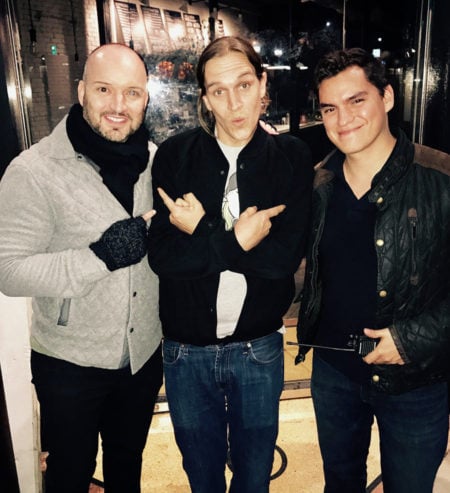 Rob Weston, Jason Mewes, and Juan Armijos on the set of A Madness in the Method

When he first moved to Los Angeles, aspiring screenwriter and director Juan Armijos says he had several completed scripts ready to pitch. But when he became a Film Connection student, he had an interesting personal reaction: He put the scripts away for a while.

“I have three screenplays of mine that I wrote that I used to be marketing and pushing on people,” he says. “But right now, after living in L.A. for a little bit…I think the best course of action would just be to put those three babies in the drawer for a while until I know the rules of this game a little more and maybe I would direct them when I have more experience.”

It’s not that he’s discouraged. Juan is simply getting a deeper understanding of what goes into producing a movie, and it’s giving him a deeper respect for the process—in part because of the time spent with his Film Connection mentor, producer Rob Weston of Straight Wire Films.

“We got along great immediately,” says Juan. “It was very interesting and enlightening for me to get to talk to him because he has a lot of experience in it, and he kind of knew how to relate to my reality…he’s a producer with many different skill sets.”

One thing that’s helped Juan gain perspective is the time Rob has spent breaking down scripts with him. “He really likes bouncing opinions off of writers because he really takes the story very seriously,” says Juan. “He knows that it’s the most important thing in the production. So he really does take a lot of time in development, the time that is necessary, but he does also try to avoid getting stuck in development hell. I think that’s my favorite part of the whole process with Rob when we work together on a script, because I can be honest with him and tell him if I hate a script or love a script that he hands me that he’s thinking of producing.”

Juan says just being part of the process has already opened his eyes. “When we stay on a script for a whole day, his notes help me realize what sells, what is more attractive for financiers or producers or whatever,” he says. “I probably learn more from him without him knowing when he’s just going about his day, because he puts all his calls on speaker so I can hear what he talks about.

He talks about stuff to other producers, he talks to directors, he talks to the writers of the scripts. And the interconnection and the social component of the whole thing is very interesting to me…That to me is the magic about this program, Film Connection, is because you get to see someone who does it every day and all the time, and they are very willing to let you into everything, every single thing.”

One highlight of his externship was when Rob helped get Juan on the set of one of his upcoming films, A Madness in the Method. “It was a learning experience,” he says, “talk to everybody, talk to the director, talk to the actors, talk to the line producers on set, just absorb the whole thing. So I did. I talked to everybody, and he introduced me to a lot of very interesting people.”

Now getting better acquainted with the process of filmmaking, Juan says he is working on a project of his own—a script he just completed with a friend who wants to work on financing it. Meanwhile, Juan says perhaps his biggest personal takeaway from the Film Connection is how to be comfortable with his own passion while having patience with the process.

“I know a lot more than I did six months ago,” he says. “The main thing I learned is to not suffer from desperation…And it’s hard to say that because if you’re so passionate about something, how are you not nervous to not get it, right? But if you can somehow find a state of mind where you’re not heartbroken and paralyzed with anxiety if you don’t get what you want, then you’re perfect for this world. And if you can also appreciate it if you do get it and get happy and ecstatic, then that’s the best life you can probably get…Every word you say represents the vision that you have without coming across as needy. It’s just something that you have to live and breathe, comfortably though.”

As for those scripts he put away…they’re only put away for a while. “They’re very deeply emotional and complex human stories,” he says. “I would love to get the tone perfect. So my idea is to just get involved in film and production, so that I learn about directing enough so that one day I can direct my own scripts.”