Back in September, industry veteran and Film Connection screenwriting mentor Ron Peterson shared key insights in this blog post about creating “forks in the road” for characters in a screenplay, using the movie Rocky as an example. This week, Ron is back with some key advice about story transformation—the “midpoint” of a story. He also shares his thoughts about writing in a 4-act structure, rather than the conventional 3-act structure—another example of what you can learn from a pro when you aren’t being taught only with textbooks! Enjoy. 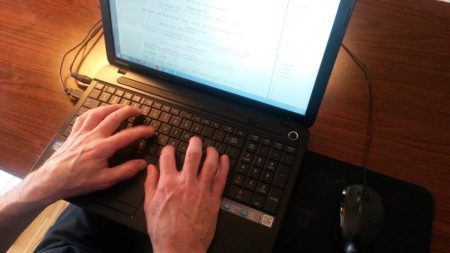 The endings, they usually kind of work out because it resolves—you know, you have the big chase scene, the blah, blah, blah, you know, the girl, she’s saved, or she’s not saved. The lovers finally come together. But there’s this desert between pages 60 and 90 where you’ve the conflict and they’re going after the goal. How do you make this exciting? How do you reengage? How do I keep it going? The problem is writers use a three-act structure, and in truth, the three–act structure does not work because it doesn’t give you a clue as to what you should do in that third act. That’s why all writers struggle with that third act. They lose the audience, and it just simply becomes boring.

Now, I use a four-act structure. So to me, Act 1 is pages 1 through 30. Act 2 is 30 to 60. Act 3 is 60 through 90. And Act 4 is 90 to 120, although these page numbers aren’t set in stone. And what we find is that you can reenergize, or reengage, or get that second half of the story going by a concept called the story midpoint, or the story transformation. At the end of the second act, or about halfway through the movie, there’s a point in the movie where the story itself transforms.  And when that happens, watch how you get a third act that explodes on the screen. You would never get that third act if you simply try to follow through a conflict that you set up in the three-act structure with 60 pages from 30 to 90.

Now let’s give some examples so I can show you what I mean.

Example 1: The Fellowship of the Ring

In the first movie, The Fellowship of the Ring, if you look at that movie, you what seems like a very profoundly, orchestrated script with characters, and subplots, and arcs. But it’s actually a pretty simple movie in structure. Watch what happens with the midpoint that you would never have if you didn’t have a four-act structure and that transformation.

The main character is Frodo, who’s asked to guard this ring by this wizard Gandalf. They find out at the end of the first act that this ring is something really special. It is the ring that binds all the rings, and that it’s owned by this evil wizard called Sauron. And now they must destroy it because if Sauron gets hold of that ring, Middle Earth is destroyed. And who volunteers to destroy that ring in mouth of Mount Doom? Frodo—the most unlikely person of all those people. He can’t even fight his way out of a paper bag, if you will. They form this fellowship to protect Frodo. And the question of the movie, the conflict becomes: Can Frodo destroy this ring and save Middle Earth?

That conflict builds in the second act until finally it reaches a point that I call the midpoint.

Gandalf the wizard, in order to save Frodo and all the other people in their fellowship, and to assure that that ring will be destroyed, sacrifices himself to kill that dragon so they can get out of that palace, and on their way to Mordor. The story transforms. Why? Because in the third act, it’s not an intact fellowship full of strength and the wizard, it is a broken fellowship, a splintered fellowship that now must struggle to destroy that ring. The whole story has changed. The rules of the game have changed. And now you can write that third act as someone who’s hobbling to the finish line, who has to overcome a whole different set of circumstances because the person that led them, the person they loved, the person who was their leader, has left the story. Everything that’s involved in that third act has a whole new meaning and level to it because the writer, exactly in the middle of the movie, transformed the story from an intact, powerful, in your face fellowship of wizards, and dwarves, and elves, to a splintered fellowship that can barely get along. This leads to the end of act three, where we realize that Sauron and Saruman are going to destroy this fellowship and Frodo for all.

Act four begins when we see Saruman, the other evil wizard, the white wizard who was working with Sauron, putting together that incredible army of orcs. At the end, the fellowship is destroyed, but Frodo lives just like the poster, and goes on to books two and three because he can’t die. Through it all, the fellowship goes through a transformation. Born in act one, strong in act two, splintered at the midpoint, disabled, battered, and finally defeated. That midpoint is that crack in the armor where their leader, Gandalf, dies, and it sets up a whole different dramatic set of circumstances in act three that is specifically designed. That is the story transforming, not any of the characters transforming.

In A Beautiful Mind, John Nash is this brilliant person who wants to come up with the greatest invention, or the greatest theory in the history of mankind. He comes up with this thing called governing dynamics. At the end of act one, boom, he gets into a research lab. And the question is, can John Nash continue to use his beautiful, creative mind to create the greatest theories in the world? In act two, he does. He wins the Field Medal, he does this, he has a relationship, he goes on, and he gets more and more. But what happens is the government starts to find out that he’s so brilliant, and they want to use him for espionage. They get him to come [and] work for them. He gets more entangled and more entangled with this weird government CIA agency. And finally by the end of act two, when he’s basically had enough because he’s married now and he wants to have a life, they won’t let him go. They say, “We own you because we keep the Russians away from you. If we walk away, the Russians kill you.”

And so now he realizes he’s got himself in a really bad situation, and there’s nobody that he can go to. The government basically owns him, to the point that they actually come to a lecture he’s giving. He freaks out and runs out of that lecture, running for his life, and all of a sudden a doctor comes up to him and says, “Mr. Nash, you must come with us.” He doesn’t know if this is the Russians. He doesn’t know if it’s the government. All of a sudden, boom, they shoot him with the shot, and we discover, along with John, that all of this was an illusion. They were not real. None of this. There was no Parcher, there was no roommate, there was no espionage. John suffers from paranoid schizophrenia. So that’s—time it—exactly halfway through the movie. The midpoint.

You see the whole story transform. The question is no longer whether John Nash’s beautiful mind can overcome the government. Now, the question is, can John Nash’s beautiful mind survive the scars and the damage of schizophrenia, and this horrible disease that’s taken away his mind? Look at the third act. It’s all about trying to help him medically, with medicine and shock therapy, and all the stuff, and it doesn’t work. His mind is gone. And so finally he can’t do it anymore—he can’t think, he can’t do his math, so he stops taking the pills. And what happens? Parcher returns. The government returns. Everything comes back. Everything goes wrong. And so finally he almost kills his poor little baby, he leaves her in the bath, etc., etc., and the wife leaves running for her life screaming and shouting when she thinks he’s going to shoot her with a gun. And she stops, slams on the brakes, and standing in front of her is John Nash, who says, “Marcy never gets old. She can’t be real. Marcy never gets old.”

He figures it out. He uses his mind to realize that this is an illusion, and he begins to divide reality from fantasy. This is where act four begins, when he realizes his little girl is not real. His wife believes him, stays with him and lets him not take the medicine, and they fight it together to the end of the story.

A Beautiful Mind is a true story, of course, but the way the script is structured, none of the drama in the second half happens without the midpoint. It creates a new dramatic situation and ties into the movie. The third act is John Nash is trying to struggle against the scarred mind. We don’t even think of that in act two, do we?

The more I write, the more I realize that the midpoint is crucial. Your central question pounds throughout the middle of the movie but the problem is, once you establish that question and that conflict, how long can it last before your audience becomes bored? Story transformation, the midpoint, gives you a second half, a second wind to keep the audience engaged.

Want to study with Ron Peterson or one of our other screenwriting mentors? Learn more here.

Screenplay Writing Advice From Our Mentors