Spend a few minutes talking to NYC Film Connection mentor Dean Ronalds, and you quickly pick up that his whole approach to filmmaking is to create and promote as much content as possible—a trait he also seeks to pass on to his students. At the time we (finally) caught up with him recently, he was preparing for the premiere of his latest short “The View from Up Here” at the Savannah Film Festival, along with preparing to release a full length docu-horror film, #Screamers in the coming months and pitching several other projects. During our recent interview, Dean talked about the multiple projects he’s working on and took a few moments to weigh in on why he believes in the motto, “Always be doing.” Enjoy! 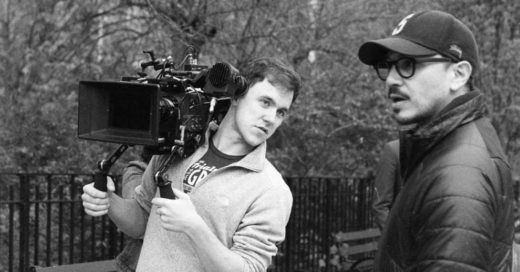 So can you tell us more about this latest film we’ve been hearing about?
“The latest one is a short that I produced for a playwright and theater director named Marco Calvani. My partner has known him for 15 years…I remember when we were watching one of his one-acts and we thought it would be the perfect to develop it with him to direct as a short film. So last year my partner and I, with our company, Falling Up Films, we produced this short film from the play with the same title, called, “The View From Up Here.” It stars Melissa Leo and Leila Bekhti. Leila is a superstar in France, a young, incredible talent. I guess she would be the equivalent to a young star out here. She’s won a French Oscar and she’s in endless films in France. And everyone knows who Melissa Leo is, the Oscar winner. And it’s just an extremely important short about a Syrian refugee, and it just seemed like the perfect time to tell this story and bring it to an audience…And now we are going to premiere it at Savannah Film Festival, and then it’s going to go to St. Louis, and we’re waiting to hear back from about 30 to 40 other festivals.”

What was it about that one act play that said “movie” to you? Was there something in the material itself?
“It was the story…It’s a message of acceptance and tolerance, and it takes a hard look at exactly what’s wrong with society today, with our culture in the United States…Also, because this young director, young in filmmaking, not in age, he—Along with the message, it seemed simple enough that, for a first outing for a theater director/writer/playwright who directs for the stage, that it could be something that would enable me to nurture him as a filmmaker and help him understand how to translate that story and, as a producer, cultivate this young playwright to understand how to translate stories into film.

Do you have any other projects in the works?
“I have a feature that I wrote and directed that should be coming out in November or December. It’s called “#Screamers.” It’s a found footage docu-horror film, and hopefully in the next week or so the press release will go out. I’m actually just waiting to figure out the release date from the distributor myself, so more news to come from that. And then about a year ago I wrote and directed a film called “Fourplay” [which is] another very dear project to my heart. It’s four actors, one location. It’s black and white, 77 minutes long, and it’s one shot. There are no cuts, no edits, no tricks. We’re just figuring out right now the best way to push that one out the door, trying to get it sold. I’ll be at AFM this coming November, seeing what I can do with that film. Then I’ve got three other films I’ve been developing for some time, and I’ll see if I can get any interest at AFM to get some distributors involved and maybe come on to distribute before we make the movie, and try to do it the old fashioned way. Instead of getting any equity money, just try to get the interest from the package and get a distributor who also finances involved, and get a movie made that way.

And then I’m always writing…I just wrote a pilot with a friend of mine, which we are taking out here in a couple weeks… So working every aspect of it, trying to also write for TV, too…I’ve got three or four shows I’ve created and I’m brushing up because they kind of just sat, and now I feel like the opportunity to get them out there exists more than they ever have. So you know, pitching, writing, producing, developing, a little bit of everything.

You’re writing, directing producing, you’re going to be at AFM, you’re out there marketing this stuff, you’re meeting people, you’re talking to them. So how do you do all of it? And do you compartmentalize different parts of your personality or your brain or your work practice? How do you manage it for yourself?
“I don’t really compartmentalize my mind in regard to art and commerce…I try not to get involved with any project that I don’t creatively feel passionate for, because it doesn’t serve me. If I’m not passionate for it, then I can’t sell it, then I don’t want to sell it and I don’t even want to be involved with it. So if I am writing something that I’ve been working on and I’m also trying to pitch it, then that’s an easy meeting to take, and it’s also an easy meeting if I am working on a project that I’ve developed from the ground up with a writer, with a director. Again, it’s a project that I feel passionate about. So the idea of hopping on a meeting to discuss the business side of it, why it would sell, why it will work, why it won’t work, who I think it’s for, I think they go hand in hand.”

Talk to us about your Film Connection students. Do you feel you have any standouts right now?
“I do. I have this young student, his name is James Braun…he’s phenomenal…James has clearly exhibited elements of passion, which I also tell them I can’t infuse passion in them, and they have to have the passion themselves, because that’s what will drive them forward. This young man has that passion and has listened carefully and executed even more carefully my mentorship, and he’s phenomenal. So I definitely have to give it to him.”

What is your approach to mentoring? What do you try to convey?
“I feel like I have sort of a foolproof plan, and I feel confident with that. If they do simply listen and execute on the things I tell them, there’s work to be had if they’re willing to put in the dedication. So the ones that do, they find work, they get work, they find that what I speak is honest truths about it. And I also always tell them, my way isn’t the only way. No. I plant seeds and I tell them, “These are the seeds to grow, and if you truly have the passion, you’ll understand that these ideas will help you calculate your own ideas and own opinions about how to do it.” There are many ways of doing it, and what I express to them and what I teach them is that these are the seeds, the ways I tell them are the seeds that I will plant. If they take those and water them and nurture them, it will grow them into a career.

My motto is ‘always be doing.’ Not thinking about doing, not trying to do, just do it… Even if you sit down in front of the computer for two hours and don’t write anything, great. Do that every day for two hours and change the habit so at least you create a habit of sitting in front of your computer, and then you’ll grow in that…With all the time in the world that these young folks have, they should be creating content consistently, and that’s my biggest thing, because that will, again, it’s like going to the gym. They expect that they’re going to be able to just lift 250 pounds the first day they’re there. No, not the case. You have to build your muscles, your filmmaking muscles, and the only way to do that is to just do whatever you can, and I will guide them in the process of the ways that will help them grow.”