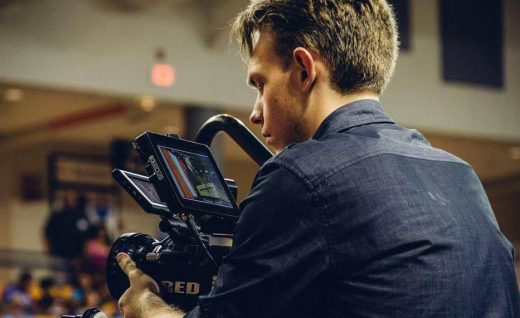 We caught up with Cliff to talk about film, writing, and producing passion projects that get you hired. Enjoy!

What got you into film in the first place?

“I was always a movie-loving kid. My dad is a big movie buff. So I grew up watching movies that he loved from, like, the 70’s and 80’s and that kind of thing, a lot of genre movies, “Smokey and the Bandit,” comedies like Mel Brooks movies like Blazing Saddles and Space Balls… I grew up loving movies, but never really knew that it was a career path or that it was even really a craft that could be practiced. But when I was in my early teens, at 13 or 14, I was getting really into technology and learning about computers and that sort of thing, and I sort of ran into film and video production from that direction.

I started learning about video editing and cameras and all that and I was fascinated by it from a purely technological standpoint. But then once I started getting into it and learned that there was a craft, and there was an art, and there was this entire field, then I was hooked.”

You’re extremely multifaceted as a writer, producer, and creative.

“I think today it’s nearly impossible just to do one thing. I think everybody and…in culture today, in society today, in especially the job world today, people need to wear a lot of hats. I sort of made my bones in indie film when it was still big here in North Carolina. So I very much came up doing a little bit of everything. And that exists to this day. So I work full-time today as a producer for Capitol Broadcasting here in Raleigh. Capitol Broadcasting is one of the larger media companies in North Carolina, and in fact on the East Coast. They own everything from WRAL, which is a pretty prestigious news organization to the Durham Bulls, the famous minor league baseball team that the movie Bull Durham was made about. So we have a lot of facets.

So I’m a producer for them. That’s what I do full time or during the day, and then on the side I write and make everything from my own documentaries to writing original fiction, comic books, novellas, short stories, that kind of thing, and then on top of all that, for the past two months now, little over two months, I’ve been running a podcast. It’s called Internet Picnic. We call it a pop culture comedy show, comedy show about the internet and pop culture and geek news and that kind of thing, but because my cohost and I, Brad, he’s also a huge film buff and a film fan, we’ve sort of taken a tack on the show of Brad is the super fan, I’m the creator, and so we end up talking often about movies or storytelling and kind of showing those two perspectives.”

Has being so multifaceted and motivated to do your own “passion projects” helped you in your career?

“Everything I’ve ever done in the entertainment field that people have liked, or that has gotten me other work, or that has opened new doors or progressed me in my career—all of them were things I decided to do myself. None of it has ever been anything that was assigned to me, given to me, that I was hired for. It has all been things that I said, ‘I think this crazy idea might work and I’m going to try do it.’…

When people see that kind of stuff, it lets them know that you’re someone who can also do that for them, and that can open doors and open new opportunities.

I tend to quote a lot of people who are much smarter than me all the time. Chris Rock said before he made it big and he didn’t have a lot of money, his car broke down a lot, and he noticed that if he stood on the side of the road with his flashers on and his thumb out, hoping somebody would come by and help him, nobody ever did, but when he got out of his car and pushed it himself, people would pull over to help him because they saw that he was already doing the work. He was already putting in the time and he was determined to do it whether anybody was going to help him or not. I think that’s the tack you have to take in entertainment. No one is going to do it for you and no one is going to give you those opportunities unless and until you’re doing it yourself and, at least for me, everything has come out of that. It was never intended, but when I look back, that’s what I always see.”