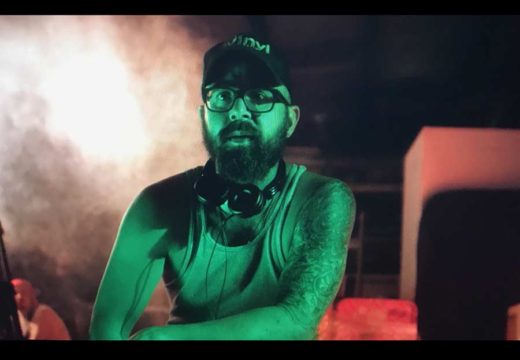 Based in the heart of Atlanta, Georgia’s booming film community, Film Connection mentor Jason Winn is an award-winning writer/producer/director with decades of experience and plenty of narrative films, music videos, commercials and documentary works to his credit. He’s also passionate about passing on his knowledge to his student externs, and his Film Connection students regularly earn credits on many of his projects.

In a recent conversation with us, Jason chatted about the changes he sees in the industry, the opportunities he finds in the Atlanta scene in particular, the role his students are playing in some of his projects, and his own personal reflections on the filmmaker’s life—many of which we found highly inspirational. The best nuggets from that conversation are mined for you below.

ON HOW HE GOT INTO FILM, AND HOW IT INFORMS HIS APPROACH TO TEACHING:
“I didn’t go to a fancy film school. I went to a university and got a degree, but I learned from the school of hard knocks, by doing it, and that’s usually the way I approach any young filmmaker that comes up to me and says, ‘I want to do this.’ My whole thing is, well go do it. You can’t wait for somebody to come in and say, ‘Now’s your shot.’ You have to go make it happen…To help the younger filmmakers kind of realize their dreams is exciting, and I think it’s important…

ON HOW HE INVOLVES FILM CONNECTION STUDENTS IN HIS PROJECTS, AND WHAT THEY’VE BEEN WORKING ON:
“A couple of students of mine, Ivan [Trevino] and Luis [Palacio]who I’ve been working with for the past year, Ivan’s getting ready to direct his first short that I’m DP’ing that I helped co-write, and we did it as a class assignment. So we’re looking to shoot that before the end of the year, and then for the past six months we’ve been shooting a documentary in both English and Spanish on luchador wrestling, which is the masked wrestling. So we’ve been interviewing this promoter here in Atlanta, and also shot a couple of wrestling matches, and I’ve gotten connected into that world. So we’ve been working on that, and we’re hoping that’s going to end up being a festival piece that we can get out…My horror film ‘Dead Thirsty’ is shopping distribution right now, and Film Connection students worked on that…and then I recently just shot another webisode of the Paula Peril series, where I had Luis and a couple of current students, Andreas [Cavadid] and things like that, but it was actually shot by, Steven Carmichael Pitts. He’s a Film Connection alumnus. He was my DP for that.”

ON HIS PERSONAL MOTIVATION BEHIND “DEAD THIRSTY,” WHICH WAS SHOT IN 9 DAYS:
“What appealed to me about ‘Dead Thirsty’ was being able to use this vehicle to get something off my chest that I needed to get off my chest, and I think my producing partners also needed to get off their chest. We decided this perfect storm happened and the money was there, and we got to make this movie, and I got to have almost 100% creative freedom to do whatever I wanted, which as a director is amazing…I was going through kind of a rough time personally, so I just kind of threw myself into the work and got to exorcise my own demons. When I came out of that nine-day baptism by fire, so to speak, it was kind of like I was cleansed. I needed that in order to move on with my life, and it was important.”

THOUGHTS ON HOW THE FILM INDUSTRY HAS CHANGED, AND THE OPPORTUNITIES RESULTING FROM IT:
“I think the biggest takeaway is, the way the technology has changed, is that you don’t have to play in the system. I mean, don’t get me wrong. If Warner Bros calls me up and wanted to offer me a bunch of money to direct a movie, I would say yes, but you don’t have to wait for that to be your opportunity to be a filmmaker and to make a difference. More importantly, whether Warner Bros calls you or you just have this calling, now you can just go out and do it. So I think for me that’s been the most exciting thing.”

THOUGHTS ON THE GROWING FILM INDUSTRY IN GEORGIA, AND THE PART HE PLAYS IN IT:
“For me as an artist, I think, looking at the next 20 years, in particular as a southern filmmaker, my goal is sustainability in the South because of our tax incentive that we have right now that everybody knows about, is based on politics. And we know that politics changes with the wind. So the only way that we have a sustainable industry in Georgia or in the South is if we start to do more creative here. There are a lot of people here that are working really hard behind the scenes to try and make that happen, to try and make funding available for filmmakers and to try and tell interesting stories. So to be kind of on the ground floor of some of that is really special to me, and I don’t take it for granted, because you only get one life, and when it’s all said and done, what’s really important, I think for me, is just to be able to continue to tell the stories that I want to tell and work with the people that I want to work with to make it happen, and to pass on whatever knowledge I have to young filmmakers to at least give them a leg up.”

HIS THOUGHTS ON THE LIFE OF A FILMMAKER, AND ADVICE FOR STUDENTS:
“I think the bigger takeaway of anybody thinking about becoming a director or filmmaker is: you don’t really have to think about it. It’s not really a choice that you make. It’s more of a universal choice that’s made for you. It’s whether or not you’re willing to get up every day and fight the good fight and put in the work every single day, even when you don’t want to. And that’s the choice that you make as an individual, but I think if you’re blessed as an artist to have that calling, you have to hear it and go with it and just know that if you put your head down and do the work, 20 years go by and you’re like, “Holy sh*t, I’ve been making movies for 20 years.” It’s a weird thing, really…To me, it kind of all circles back to the work. It’s like, do you enjoy the work? If I had $1 million, what would I do? Nothing would change other than I’d have more money in my bank account. I play rock and roll and make movies for a living. That’s not a bad thing.”